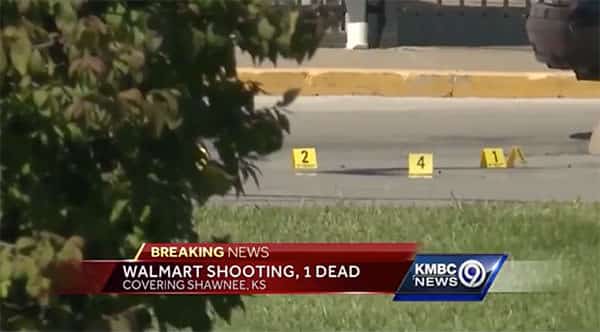 A Kansas woman possibly owes her life to two good Samaritans who intervened when she was attacked in the parking lot of a Shawnee Walmart, KMBC-TV reports.

The victim was putting her infant child in a car seat when two strangers approached her and struck her in the head.

One unarmed man nearby heard her scream and exited his car to help—only to be shot several times.

That was when another bystander stepped in. This man was armed and able to shoot one of the attackers, later identified as John W. Simmons III, killing him.

The good Samaritan who was shot was listed in critical condition and had surgery Sunday night. He is identified as a 33-year-old Kansas City, Missouri resident. The woman has been released from the hospital.

The armed good Samaritan, a 36-year-old DeSoto, Kansas man, was interviewed by police and released.

“You know our hearts and prayers go out to both of them for a speedy recovery. I know we have many people out right now, many teams of officers and detectives. We had to make contact with the family of good Samaritan number one to get them to the hospital to be with him, but apparently good Samaritan number one is able to talk,” said Maj. Dan Tennis, of the Shawnee Police Department.

While it’s commendable that two men stepped forward to help someone in need, it was the armed citizen who had the tools to help and walk away unharmed. And that’s as good of a reason as any to carry.