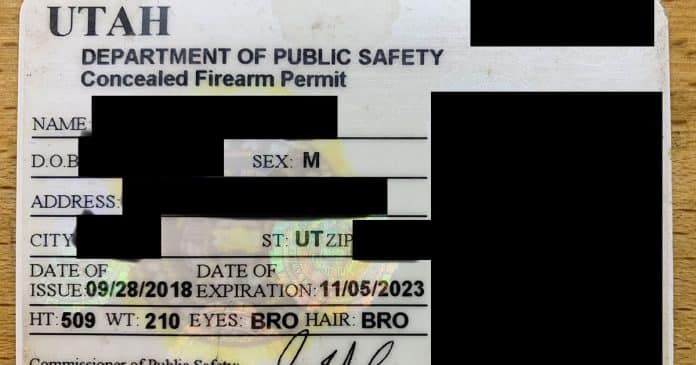 H.B. 60 allows individuals 21 years old or older to carry a concealed firearm in public without needing a concealed carry permit as long as they are legally allowed to possess a firearm. You can read the full bill here.

In addition to constitutional carry, the bill also states that at the end of every fiscal year, 50% of the fund balance will be transferred to the Suicide Prevention and Education Fund.

No later than 90 days after the end of the fiscal year 50% of the fund balance shall be transferred to the Suicide Prevention and Education Fund. Money in the fund shall be used for suicide prevention efforts that include a focus on firearm safety as related to suicide prevention.”

Will you still be able to get a Utah Concealed Carry Permit?

Yes. Residents and non-residents will still be able to obtain a Utah Concealed Firearm Permit from the Utah BCI Firearms Division. For more information, visit our Utah Concealed Carry resource.

Why would I want a Utah Concealed Firearm Permit if they allow Constitutional Carry?

Will Non-residents be able to carry a concealed firearm in Utah without having a recognized CCW from another state?

I don’t have a definite answer on this yet but it seems that it may apply to non-residents. For starters, Utah does allow non-residents to apply for a Utah Concealed Firearm Permit. Also, the bill states:

The subsections this statement is referring to are the penalties for carrying a concealed firearm which also refer to “a person.” I am no lawyer but I don’t see anything that states this new law only applies to residents of Utah. That being said, I reached out to the Utah BCI Firearms Division and will update this article when I hear back from them.

With the increase in new firearms owners over the past year as well as the increase of concealed carry permit applicants, many states are very backed up issuing permits. Laws like this allow lawful gun owners to carry a firearm to protect themselves and their family without waiting months for a permit or license to do so. But of course, not everyone agrees with this.

The Utah Gun Violence Prevention Center opposed this bill stating in a Tweet that “Arizona experienced a 44% increase in aggravated assaults committed with a firearm.”

But on the other side of the coin, The Free Beacon reported:

“The Utah state senator David Hinkins (R.), who sponsored the bill, disputed those talking points, arguing that broadened gun carry laws have not been linked to surges in gun crimes.

The three safest states in the U.S. have permitless carry laws: Vermont, New Hampshire, and Maine,” he said during a floor debate. “This is not a left or a right issue, it’s a good policy backed by good data.”

Now, remember, this law goes into effect on May 5, 2021. We will update our Concealed Carry Maps to reflect this change on that day.

Signing Constitutional Carry Legislation into law is certainly a very “tactical” action for any governor to take, IMHO. More governors need to do this.

Montana passed a similar law since this article was written. The bill had been previously vetoed by a former governor, so the voters worked to elect a more “tactical” governor who signed the legislation.