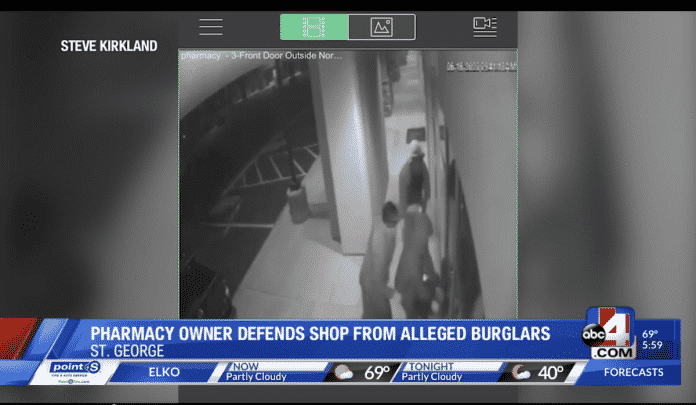 Four California men drove to St. George, Utah, with the apparent intention of robbing several pharmacies. A bit before 3:00 AM, they attempted their first burglary using crowbars to break open the front door.

The sounds of the door breaking alerted the pharmacist who was working in the back late that night. Checking the front door, he saw three men at the door. He then drew his handgun, called 911, and retreated toward the back.

After the men broke in, they moved toward the stores safe, which happened to be within a few feet of where the pharmacist was hiding. The pharmacist said he was thinking:

“How do you guys not see me? Every light in this place is on.” REPORTED ABC4.COM

With his gun pointed at the burglars, he yelled loudly at them. This caused them to flee the store and drive away without incident.

The pharmacist followed and was able to get the vehicle’s make and model, which he relayed to the 911 operator. Responding police used surveillance video to get descriptions of both the men and the tools they used to break in. This info was then sent out to other departments in the area, and other pharmacies were watched.

Eventually, an officer spots a vehicle with individuals matching the suspect’s description and conducts a traffic stop. All four men were taken into custody and booked on various charges.

Police praised the pharmacist for his responsible actions.

Indeed, he may very well have been justified to fire on them as they came into the store. Three on one with crowbars is easily a deadly force threat. Confronting criminals is always a risky move, though, since you never know how they will react. Fortunately, they weren’t armed beyond the crowbars, and they apparently weren’t looking for a fight. It’s always a safer move to flee the building if you can or hide and let them finish and leave.

Fortunately, all four were apprehended without incident as they were likely headed to another pharmacy to try again.