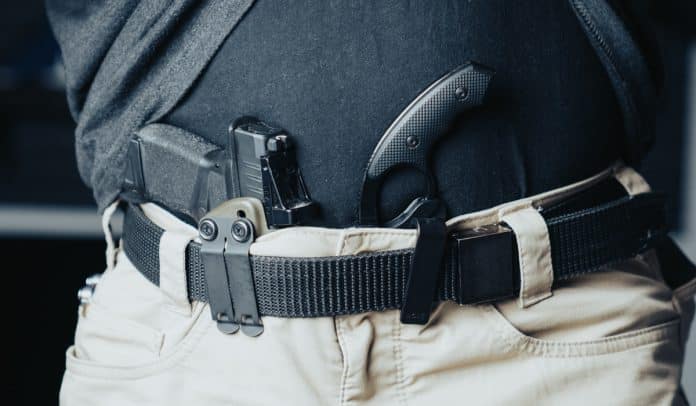 There is nothing new about appendix carry for weaponry. Look at portraits of 16th Century Caribbean pirates, or perhaps Colonial-era commanding officers, and you will see flintlock pistols stuffed in waistbands forward of the hips. Carrying guns in this position was also done quite often in the much-acclaimed Wild West. While all of the cool guys running Glock 19s in wedged AIWB holsters think they are onto something cutting edge, there is nothing new under the sun.

In terms of carrying tools in front of the hips, generally referred to as appendix carry, we most often think of a holstered gun. Still, the advantages that apply to a pistol carried in this manner also apply to any other tool carried forward of the hips. A spare magazine carried appendix, on the support-hand side, will conceal better for most people compared to strong side carry, and it is more accessible to both hands. It is likely faster to access as well if you are wearing a closed front garment. Some folks carry a tourniquet forward of the hips so that it is quickly accessible to either hand. Perhaps not a bad practice, though I admit I carry my tourniquet in a hip pocket.

Beyond my gun, the second tool I typically carry forward of the hips is a small knife, opposite side from my pistol. The benefits of AIWB as they pertain to the gun also apply to the knife. What are the notable advantages of carrying defensive tools forward of the hips? There are several that stand out:

Tools worn forward of the hips typically conceal more readily than those worn on the side or behind the hips. The human body naturally hunches slightly forward, and the cover garment tends to drape over these tools, better concealing them. Weapons carried forward of the hips are less likely to print while you are moving or bending.

It is quite well demonstrated that an appendix carried concealed handgun is faster to draw than is a concealed handgun on the strong side hip. While a few tenths of a second may not matter much to you, faster is faster. The faster the weapon can be deployed during an emergency, the better. A gun carried in the appendix position can be drawn faster from concealment than from anywhere else on the body. And the same goes for the ability to draw a blade or any other tool. This is a significant advantage.

More Accessible from the Seated Position

We spend a good deal of time seated, be it in a vehicle, at tables, or desks. Tools worn in front of the hips prove easier and more efficient to access compared to tools worn on the strong side of the hips, or certainly behind the hips. There is less motion involved when accessing tools from the appendix location while seated, and this location minimizes the obstruction of the seat, table, and other obstacles to the draw stroke.

It facilitates a Surreptitious Draw

There are a variety of circumstances in real self-defense that may require you to covertly present the gun so that you have it ready in your hand. It is generally easier to covertly draw a tool that is carried in front of the hips as you can do so with minimum shoulder and elbow movement. If you are seated at a table or bar, for example, your upper body may be visible to the threat, but your hands are hidden. The tool carried in front of the hips facilitates the surreptitious draw.

Less Likely to Cause Injury

This is another reason that I prefer appendix carry, yet it is seldom talked about. Tools worn in front of the hips are in a body location that is unlikely to cause injury should you fall. If you have been in real fights or done any amount of force-on-force training, you will quickly realize that falling is a very high probability in any given fight. A gun worn on the strong side hip can cause injury should you fall onto your side. A gun worn small of the back, which is a terrible way to carry your gun for a variety of reasons, can cause serious spinal injury should you fall on it. An appendix carried tool is unlikely to cause bodily injury during a fall.

More Accessible to Either Hand

The handgun, carried in the appendix position, is much easier to access with your support hand compared to the strong-side carry position. Likewise, a center-line carried knife provides this advantage. I like having a knife accessible to both hands. A folder clipped to a pocket is hard to access with your opposite hand. The knife may serve as a backup weapon, and ambidextrous access is important. However, I carry a knife primarily as an emergency cutting tool, and its role as a weapon is secondary. Still, ambidextrous access remains important. If you are in a car wreck and need to cut yourself free of a seatbelt, but cannot move the arm that a folding knife is accessible to, you could have a problem. A knife carried forward of the hips is accessible to either hand.

No matter the tool, if it is a piece of essential rescue gear, carrying it in front of the hips, offers a significant advantage. Your body corresponds to this position, and appendix carried tools are in the most versatile and most accessible position.

Besides, if the pirates did it, do we even need another reason?