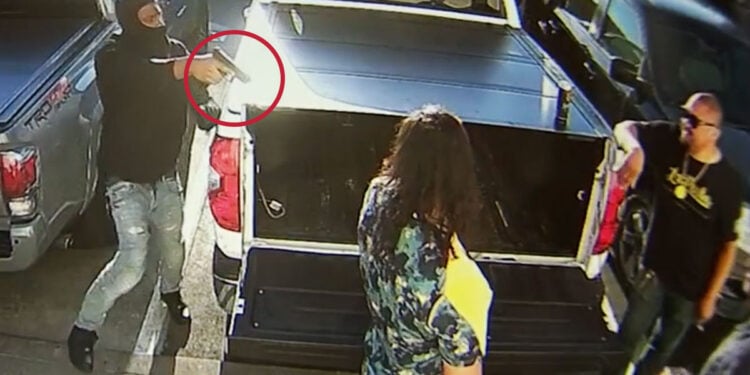 A victim in Oakland, CA, got off lucky, unlike a victim in Chicago, IL who was shot execution-style this week.

Gabriel Ortiz, the owner of La Perla Puerto Rican Cuisine in Oakland, California, was talking to two friends outside his restaurant Wednesday evening when three armed robbers jumped out of a car and ran up. Ortiz sees the first gunman, and as he backs up between two vehicles where he goes for his gun. What he didn’t notice was another gunman approaching from a different angle.

In the video, you can watch him go for his gun that he has concealed at his three o’clock position, but it’s too late as the second gunman has the drop and is right there as he reaches for it. A brief struggle ensues, and the robber ends up with both guns, with no shots being fired.

3 armed men robbed owner of La Perla Puerto Rican Cuisine & 2 pals outside the restaurant near Fruitvale & MacArthur, taking cash, a gun & gold necklace. “It’s frustrating to deal w/all this crime, that it comes to your back door,” owner tells me. ⁦@oaklandpoliceca⁩ on case pic.twitter.com/DOlCB3IKxx

Ortiz told KTVU news, “I was getting ready to pull my firearm, and this guy was right behind me. So there was already a tussle, with him knowing that I had a gun. He was like, ‘Get his gun!’ So that was a game-changer,”

This is a perfect example of why situational awareness is so important. It would have been an almost impossible encounter to defend yourself in, but Ortiz could have prevented the gunman from getting his own gun. There was also a third robber off to the right side out of view of the video. Ortiz had his back to the parking lot facing the building. If his back had been towards the building, the assailants would have been in his line of sight from the moment they exited their vehicle.

The entire encounter only lasted a little over 20 seconds, and fortunately, none of the victims got injured. It is worth noting that the criminal had his finger off the trigger during the struggle, which probably prevented Ortiz from being shot.

Guys, and gals, you need to be aware of your surroundings at all times. Yesterday, there was another shooting in Chicago where the victim got shot in the head when he was robbed at 3 AM walking down the street.

Why We Carry: Man Shot 3x After Cooperating with Armed Robber