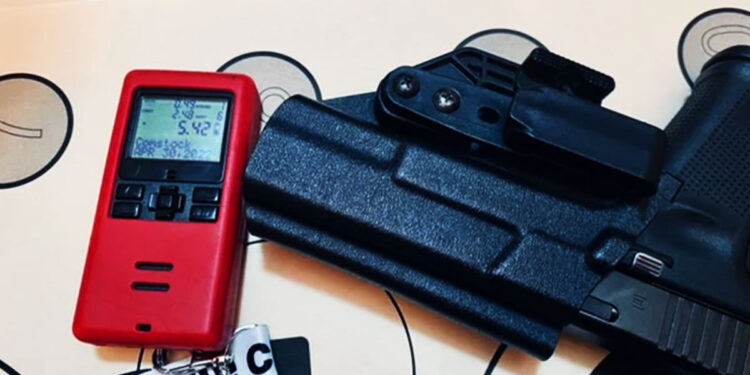 If you run in performance shooting circles, you are bound to eventually hear about a drill called Garcia Dots. Its creator was Frank Garcia, the owner of Universal Shooting Academy. This drill has been around for quite some time, but it doesn’t seem to get much play outside of competitive shooting circles, at least that I have seen. This probably has something to do with the drill’s difficulty level, at least if it is shot as originally intended. Just my guess.

Garcia Dots requires a target with six 2” circles, or dots, placed at 7 yards. You can make your own target in Word, use some sort of 2” sticker, print off any one of the many targets available online with 2” dots, or use an LTT target or one of the other commercial targets with 2” dots. Logistically, this is an easy drill to pull off.

The strings of fire are also pretty straightforward. On each of the 2” circles, draw and fire six rounds with a 5-second par time. That will be a total of 36 rounds fired to complete the drill. Any shots over time don’t count, and make-up shots are not allowed. The scoring is a simple pass/fail. You either hit with all 36 shots or you don’t. Anything less than perfect is a fail.

How Hard is This?

This is a pretty high level of shooting and one that quite honestly I cannot meet yet. I can hit 2” circles at seven yards nearly all day without time pressure. Figuring in the draw though, there is only about three seconds of actual shooting time per string of fire. Maintain half-second splits on a 2” circle at seven yards and getting 100% hits is truly impressive.

Considering how difficult it is to hit a 2” circle at seven yards without time pressure, it is pretty easy to understand why this particular drill doesn’t get the same amount of attention as other drills. For many of us, this would be swinging for the fences and crossing our fingers that we somehow get lucky and make it. Getting lucky six times over just isn’t going to happen though.

How to Make it Accessible

Even so, there is usefulness here for anyone. At least in my opinion. If your skill level allows you to actually have a chance at this drill, then it is good as an actual drill. Many of the drills that we shoot aren’t really drills. They are more like tests. You would then break down the components of the test and practice those separately. Garcia Dots is useful as an actual drill where we learn and get reps, for those who have the skill to meet the standard, or very nearly meet the standard.

For people who don’t have the skill to meet the standard yet, Garcia Dots can be used both as a performance metric or test and as a goal to work towards. The original drill is meant to be pass/fail, but we can also keep score by tracking the number of hits out of 36. Much like we would track our performance on Dot Torture which is a more familiar drill for most people.

If 2” circles as 7 yards is just too much to ask, decreasing the distance would be an option to make the drill more accessible with the understanding that it is no longer a true Garcia Dot drill. The start position could also be changed to accommodate use on indoor ranges or other places where drawing a handgun may not be allowed.

This is a real gut check of a drill. If you give it a try, drop your thoughts in the comments.