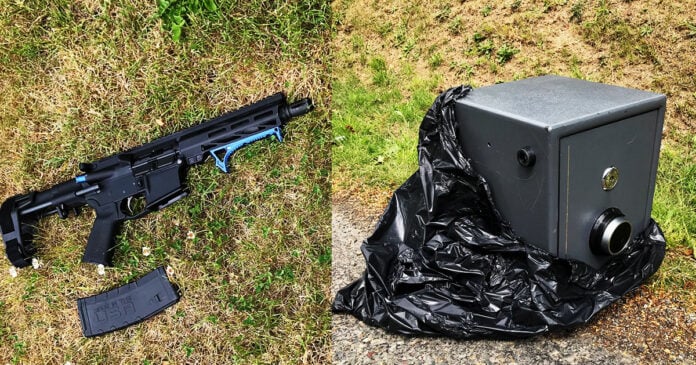 In Pirece County, WA, a homeowner was notified of a Ring doorbell activation while he was away, in which he asked his friend to make sure the house was okay. The friend, Aiden Bullock, drove to the home and noticed someone walking out the home’s side door.

Bullock was worried about making sure he would not get shot and also, while at gunpoint by the suspect, had his phone taken away.

“He’s sweating. He’s nervous. He’s twitching all over the place,” Bullock said. “I kind of feel bad for him, but, at the same time, those twitchy fingers are pretty close to the trigger.”

Bullock ended up talking down the suspect in which the man took a duffel bag full of the homeowner’s items as well as a safe. However, he also still had the gun, which he refused to leave. This prompted Bullock to follow him.

“I yell at him, ‘Hey, you need to leave that gun!’” Bullock said. “I couldn’t, in good conscience, let him walk around the neighborhood with a loaded rifle,” he said.

The suspect dropped the weapon after Bullock, who was carrying his own gun the whole time, drew his weapon and fired a warning shot when he thought the suspect was reaching.

“I fired off a warning shot into the ditch next to him because I didn’t want to shoot the guy,” Bullock said. “He grabbed the duffel bag and said, ‘You won’t shoot me!’ And started running away,” he said.

Bullock then called 911, and the Pierce County Police Department found the suspect hiding in a tree line nearby. The department commended Bullock for taking matters into his own hands but reiterated the dangers of individuals taking these actions.

“We ask people to try to not handle things on their own. I know everything worked out in the end on this one. It could’ve gone really badly.”

In good conscience, of course, someone would rather not let their buddy’s weapon be taken away in front of them. Fortunately for Bullock, he was able to dodge the legal ramifications of his warning shot, but that cannot be said the same for someone in, say, another state. What helps Bullock’s case is that it turned into a kidnapping situation, which then the question lies with who was the actual aggressor?

Still, although in good heart, Bullock risks his safety despite being armed as well. Handling this situation on his own more than likely could have gotten him hurt. Thankfully the suspect did not shoot at Bullock, but it must be remembered taking warning shots could make you the aggressor and pose a danger when considering the legal ramifications.

With defunded police the people will have to take things into their own hands.