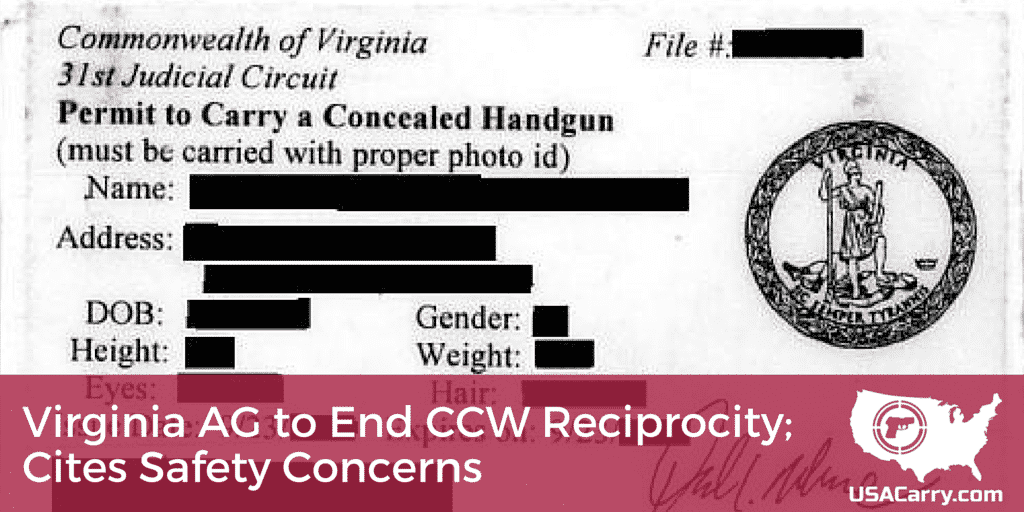 Virginia’s Attorney General, Mark R. Herring (D), will announce today that the Old Dominion will no longer recognize concealed carry permits from from other states that currently have reciprocity agreements with Virginia. AG Herring argues that out-of-state agreements make it too easy for people with criminal or violent histories to obtain a concealed weapons permit.

“To me, this is a commonsense step that can help make Virginians and our law enforcement officers safer by ensuring that Virginia’s laws on who can and cannot carry a concealed handgun are applied evenly, consistently, and fairly . . . Our General Assembly has already identified who can and cannot conceal handguns in Virginia, and we cannot have that decision undermined by recognizing permits from other states with more permissive standards,” Herring said in a statement to the Washington Post.

The measure is also intended to affect CCW in Virginia by preventing residents with a history of stalking, drug dealing, or in-patient mental health treatment from obtaining a permit from another state and thus carry at home.

Herring’s actions have already come under fire from pro-CCW and Second Amendment groups, who have long been critical of the attorney general’s stance on the issue.

CCW should be just like drivers licenses and marriage licenses and be honored in all 50 states. I am certain that this change will only affect law abiding Virginians and DO NOTHING to prevent criminal activity.

You’re wrong, it will affect law abiding citizens from other states whose permits are no longer recognized by VA…Though it may increase $$ coming to the state thru the form of the $100 (last I looked) or so fee they charge for a non-resident permit.

Please read my statement. I said it will only affect law abiding citizens yes from all states my point is gun restrictions do nothing to stop the criminal element

Mark Herring’s AG campaign received a lot of money from Michael Bloomberg. This is simply Herring delivering our rights that he sold. Virginians will lose coverage in Florida, Louisiana, North Dakota, Pennsylvania, South Carolina, and Wyoming. Worse yet, there’s no lawful open carry option in South Carolina or Florida. Herring won by 165 votes. 166 voters demanding better and we wouldn’t be discussing this travesty.

This is a joke, Virginia, while requiring a state certified class to get a CCW, the class can be online and one doesn’t even need to have fired a handgun in order to qualify.

I signed up, paid my $20, drove home during the required 1 hour wait for “watching the video”, took the 20 question test, passed with greater than 75% correct and got my certificate that evening.

I would say that it is about the easiest permit to get.

Awesome, the 5 states we keep are states I never go to. Hopefully the VCDL comes up with a way to stop this before 2/1

Money grab…. VA sells non-resident permits. Why honor some other states permit when you can charge non-residents for one instead?

Well, lets put Virgina on notice that unless they voluntarily return the fees paid to the state from all of the out of state CCW holders, there may be a Class Action Suit headed their way !

On what grounds? They still honor their non-resident permit, and actually this is simply a ploy to sell more of them to people who want (or need) to travel to/thru the state of VA

Could this just be to boost the out of state permit applications at $100 a pop?

There should be NO licenses required for weapons or driving. States have got to stop leasing our Rights back to US after they steal them from US!!!! This is against all he swore to uphold and defend!!!

Don’t you just love it when politicians run out of things to tax?

Luckily, Virginia does issue nonresident permits to out-of-staters who want to carry in Virginia.

And those non-residents can get these “non-resident” permits (with the proper payment, of course) by applying through the MAIL. Any state other than Virginia has less stringent requirements that that for THEIR in-state concealed carry permits, right?

The idea that a felon is going to be able to get a CCW just because they go to another state is disingenuous. It’s the same fingerprinting and FBI/DOJ background check no matter what state you apply in.

Typical liberal democrats under the Obama reign. It’s funny no state allows felons to have carry permits, and his state is so perfect, what a political slap in the face to the rest of the states. I was just getting ready to go to the movies in Virginia, and I live in Kentucky just across the border and I was going to carry conceal, wow. Virginia the next New York!

Virginia governor is an anti gun psychopath. He is behind this. It gun control pure and simple. As governor it’s about all he can do without an act of law from the state house.

And I was celebrating the holidays in Virginia with kin, I arrived legally and left having been declared illegal.

Ouch, and that on an illegal executive order.

Can I get a CCW passport, get a stamp for every State I can carry in? Maybe digital on my smart phone!
This is sad, will have to cave in and get another permit!!

I believe that the “passport” you seek is called “gun registration” by Obama and his familiars.

joking, I carry everywhere permit or not

This sucks, I live 2 miles from the Virginia line and go there just about every day, I may have to rethink that and drive further here in NC and spend my money.

We will soon be travelling home to the south after a nice Christmas visit with friends & family in the northeast. Will make sure the gas tank is full, lots of snacks and water in the vehicle before crossing the boarder between WV & Virginia. Won’t need to stop until we get to NC. Well, may stop to leave some piss and crap in Virginia.

“Common sense” and “Democrat” are two words that CANNOT be used in the same sentence, Now, there is no difference between Virginia and Maryland. The body count can only increase….