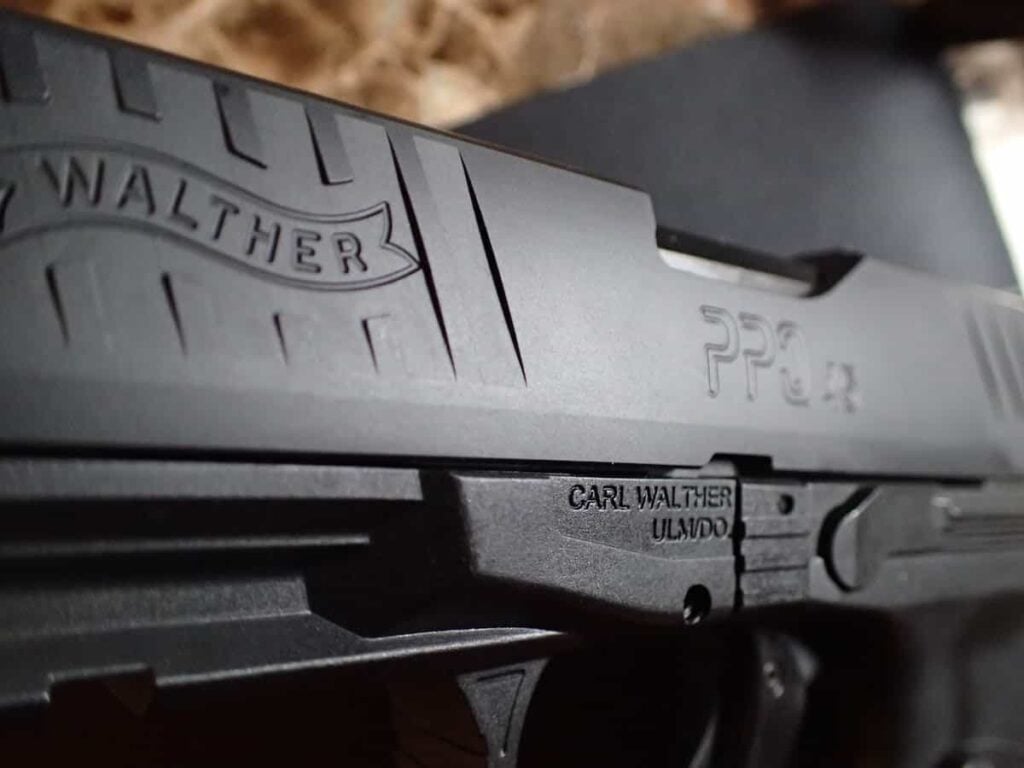 Walther has earned a strong and stellar reputation over the years for producing reliable and innovative products. All those years producing firearms and they shied away from the venerable .45 ACP, until now. In October of 2015 Walther presented the PPQ .45 ACP to consumer market. Based on the P99, the PPQ 45 comes to us with a wealth of Walther innovation and engineering prowess as part of the package and it brings the P99’s nearly perfect ergonomics along for the ride.

My first chance at seeing and feeling this remarkable pistol was at the 2016 SHOT Show. Walther made the PPQ available on range day. Steve and I tried it out and right away, we both agreed that the grip is nothing short of perfection. Steve, being a lefty and my right handed shooting means that Walther got it right no matter the dominant hand. But, I’m probably getting ahead of myself here. Let’s go back to basics.

What’s in the box?

The PPQ comes in a foam-lined plastic case. Included in the case are the gun, two 12 round magazines, lock, unloaded chamber flag, backstrap with a slightly lesser contour than the one that comes fitted to the pistol, a magazine release button for left-handed shooters (!), manual, owner registration card and an NSSF firearms safety pamphlet.

The PPQ 45 is a full size, polymer frame hand gun. It is striker-fired and has a 12 round double-stack capacity. Overall it weighs in at 28 ozs. With an empty magazine. You already know that it’s a .45 ACP. The barrel is 4.25” long and it has an overall length of 7.4” and an overall height of 5.8”. It’s not a small gun by any means. Width is right at 1.3”. Its dimensions suggest that this gun is really aimed at law enforcement as a duty gun, however, it is concealable. It has an MSRP of $699. Cabelas is offering it for $679 as of this writing.

On top, our PPQ is equipped with low profile 3-dot combat sights. The rear sight is windage adjustable. Trijicon has some pretty nice night sights available for this platform if you’re interested.

For a moment, let’s discuss the overall design involved with this handgun. Consider for a moment your hand. The human hand does not have any right angles on it anywhere in the palm or thumb area when grasping an object. Go ahead, look at it. See what I’m talking about? None. Now have a gander at the grip on this gun. The only right angle anywhere on the grip is at the bottom where your hand doesn’t hold on to it. The grip itself is smoothly contoured on the front and the back. Now, have a look at your hand again. Hold it up like your gripping an imaginary pistol. Your thumb and fingers form opposite side of a “C”. Again, compare that with the grip and you’ll see that the design was in consideration of what an actual human hand looks like when holding on to a grip. Too many manufacturers today stop with the “does it work” question answered. However, true engineering and refinement won’t happen until the user experience is brought into focus in conjunction with the “does it work” methodology. Think for a moment about automobiles. There are many that “work”. They do the intended function, provide transportation to and from. Then there are those that provide a new and more positive experience. The driver and passenger have more comfort, more bells and whistles, better seats, the list is endless. Even pick-up truck manufacturers got into the act. In the not too distant past, a pick-up was completely utilitarian. A bench seat covered in something that usually made you sweat when one sat upon it, a thin plastic steering wheel, and a very basic radio, no carpet, and it was noisy and cramped. Now, the manufacturers offer interiors and cab configurations that rival luxury cars. In my mind, this Walther design is much like that evolution. The user experience was just as important as the reliability and ruggedness aspects.

With that in mind, Walther included practical design elements along with the user experience elements. For example, the front end has a standard Picatinny rail to hang a laser/light on. The unit is not equipped with a manual safety. It utilizes a trigger safety mechanism. It has a loaded chamber indicator on the right side, at the rear of the extractor. It is pretty small, but can be seen fairly easily once you know where to look. There is a slide stop on both sides that is well within reach of your thumb. It is nicely raised and is well ridged to make it easy to manipulate, but it is flush enough to not snag when drawn from a holster or on clothing. As mentioned above, the magazine release is changeable from left to right. The good news is that Walther incorporated the button style mag release that we’re used to here in the States rather than the more European “paddle” style release. The frame is polymer while the slide and barrel are steel. Both the slide and the barrel are coated with Walther’s “TENIFER” coating. This gives them a matte finish and corrosion resistance. For reference, the barrel is black in color, not unfinished, which provides a nice overall aesthetic along with the added benefits of resisting scratches and corrosion.

Let’s get to the part that really makes this gun stand out (aside from the ergonomics); the trigger. The trigger is what really makes this handgun special. Walther’s specs claim a 5.6 lb. trigger pull. After 5 pulls with my scale it averaged 5.5 lbs. There is a small amount of take-up to the break point, then you get a clean, quick and crisp break. The reset is phenomenal (see the video below). The specs claim that the trigger travel from the time it begins to engage until it fires is 0.04”. I haven’t specifically measured the reset point, but it stands to reason and feels like it’s the same distance.

A few notes to be aware of about this firearm regarding the use of different ammunition types: The manual discusses Plus-P ammunition. While the PPQ can utilize Plus-P ammunition, the manual suggests that using this type of ammo will cause more wear, “or exceed the margin of safety”. So, while they’re not outright telling you not to use it, it certainly is a suggestion not to. The manual also specifically states not to use Plus-P-Plus ammo at all and to stay away from steel cased ammunition. With that in mind, I bought some Remington UMC target rounds and took it to the range.

At the range, this thing is a champ. I know that a lot of people are now adopting this platform for competition shooting. I cleaned and lubed the PPQ just before coming to the range. I proceeded to put some 350 rounds through it over several trips to the range and it ran flawlessly. I had no issues with what ammo I fed it (I did not use any +P ammo) nor was it hard to handle the recoil. Most folks think that .45’s are hammers. While not a .22 by any means, I’ve fired much smaller calibers that, in my opinion, are much harder in the recoil management department than almost any .45 I’ve fired. The only minor annoyance I dealt with was the magazine. Getting that twelfth round in isn’t possible with your bare hands unless you happen to be the Hulk. I turned to my trusty Uplula loader and it handled the last round duties just fine.

It did not take any time at all to get used to the PPQ. Since the ergos are so good, grip is easy to attain and the sights are quite good overall. I easily picked up a good sight picture and was rewarded with good hits each and every time I fired. Handling is also very good. I have medium size paws and my thumb instinctively found the magazine eject button and the slide stop. Basically the controls are simple and intuitive and well placed.

I performed a few double taps. The muzzle does have a fair amount of muzzle flip, as to be expected, and my follow up shots went pretty wild. However, they still landed in the overall target area. The PPQ was accurate from 7 yards out to 25 yards. I had no issues getting rounds on target and those distances. I only tried the 25 yards position because I felt it was doing so well at 7 yards. The photo shows the shot grouping at 7 yards. 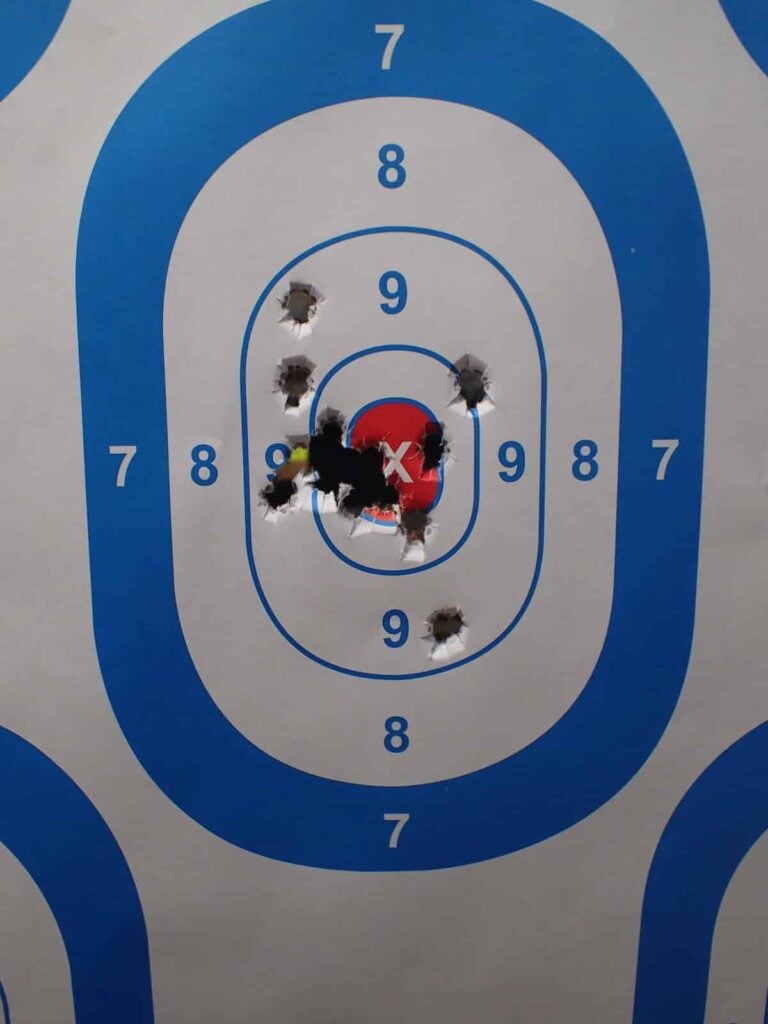 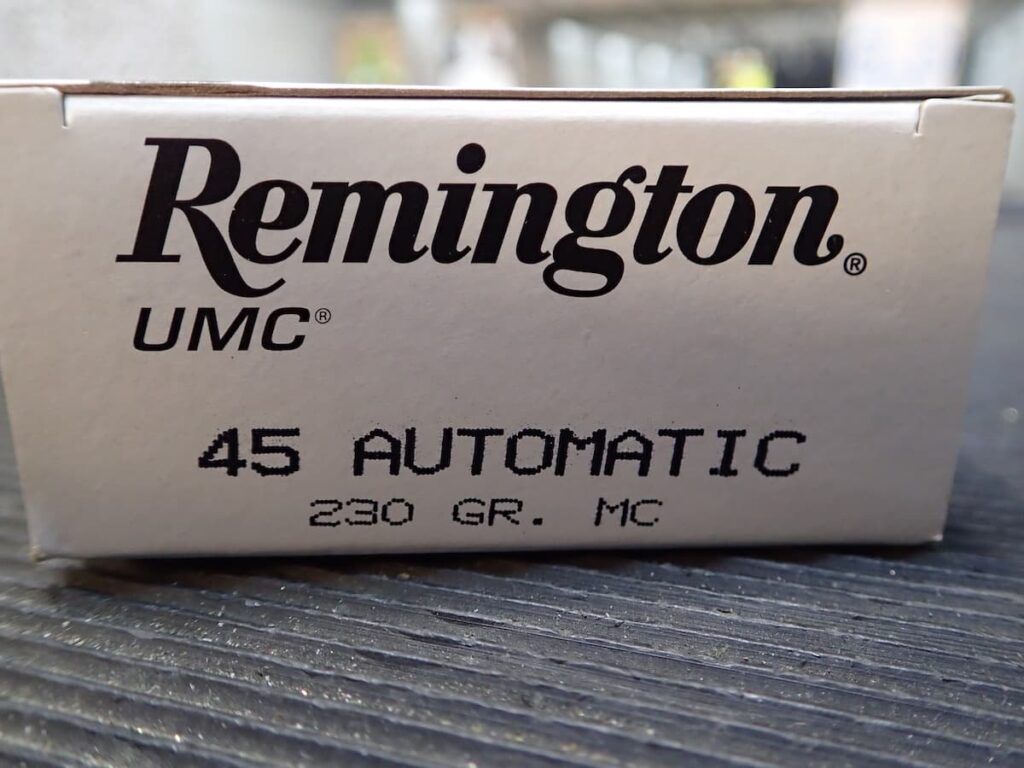 It’s evident that this is, in my opinion, a great handgun. It’s solidly built in Germany with superb ergonomics and a phenomenal trigger. In fact, I usually hunt for things that I think you should know about before you go out and spend your hard earned money on something. In the case of this PPQ, Walther’s first effort on a .45 ACP, I can honestly tell you that I don’t find anything cautionary about it at all. Some of you won’t like the fact that you have to pull the trigger before the take-down process and some of you will hate just to be haters. For the rest of you considering a full size .45, I think this gun should move to the top of your consideration list. I mean now.  Couple all of that with Walther’s lifetime warranty and you have potentially one of the best full size .45’s available today. Sorry, Walther. You’re not getting this one back.

Second Amendment Right vs All Other Rights