by Mike Doran
in Articles
36 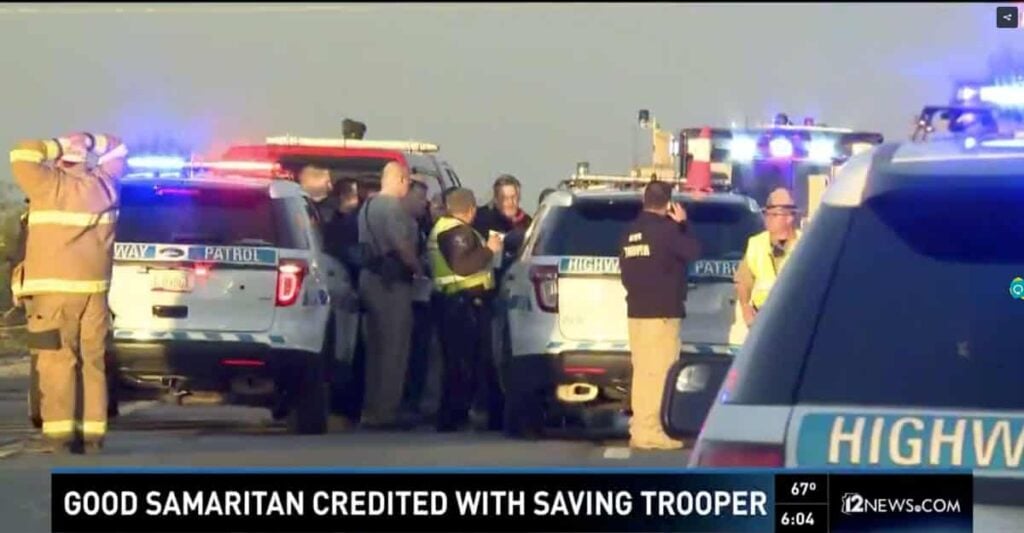 One Arizona Department of Public Safety trooper owes his life to an armed citizen after a being ambushed and shot on the side of Interstate 10 early Thursday morning.

The 27 year veteran trooper, identified as Edward Anderson, was responding to reports of shots fired at a motorist’s car. The driver of that vehicle said their car had been shot at from the median of I-10.

That’s when he was attacked.

The suspect shot Anderson in the shoulder and fought the trooper to the ground. Once on the ground he began hitting Anderson’s head on the pavement.

Luckily for the trooper an armed citizen and his wife were traveling westbound on the interstate and noticed the fight. They pulled over and the man retrieved his weapon and confronted the suspect.

When the attacker refused to comply the Good Samaritan fired, killing him. The man then called for help using the trooper’s radio.

Anderson was hospitalized and in serious but stable condition after surgery for his gunshot wounds to the shoulder and arm.

“I don’t know if my trooper would be alive today without his assistance,” Milstead said

This attack is shockingly similar to one that happened in Florida late last year.

In a time of ever increasing anti-police mentality, concealed carriers need to ask themselves what role they would take in situations like this. Are you merely going to be a good witness or risk your own life by stepping in to save someone else, as this armed Arizonan did?

Let us know in the comments!