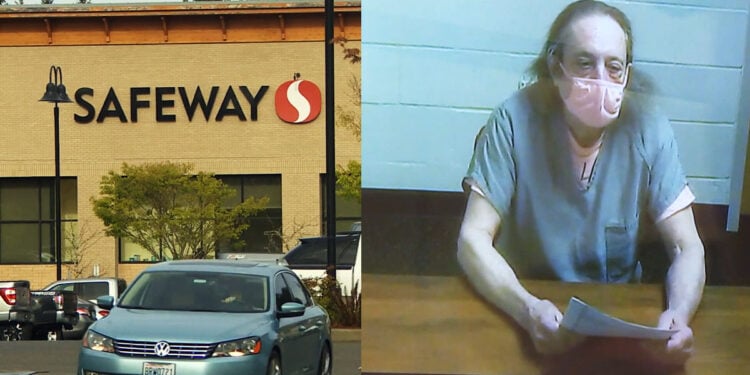 While I am listing this under the Defensive Gun Use category, I want to state that this was, in my opinion, an unjustified shooting. And since the suspect has been charged with first-degree assault, it seems that the prosecuting attorney believes it was unjustified as well.

A 70-year-old man was shopping at a Washington grocery store around 11:20 PM on April 30th, 2022. According to the man, a cashier mentioned, “someone might have stolen something.” He told police that he saw a man and woman loitering around a store entrance.

That’s when he decided to ask the couple to show him a receipt for their purchase. They denied that they were shoplifting, and then a fight broke out. We don’t have details of who started the fight, but video footage shows the 40-year-old man punching the 70-year-old man several times.

The fight spilled outside of the store, where there were no surveillance cameras. The 70-year-old man stated he thought he was being beaten to death, so he drew a handgun and fired at the other man. His gun malfunctioned, and after clearing it, he said he fired a “test round.” One of the rounds grazed the 40-year-old man’s neck, and the other struck the glass door to the grocery store.

The victim was taken to the hospital and was treated for non-life-threatening wounds. The 70-year-old man cooperated with the police and was taken into custody. But this wasn’t the first time this man has been involved in an incident like this.

Apparently, he was working as a delivery driver for Pizza Hut last year. He confronted a man he suspected of lifting car door handles. He stated that the man didn’t leave when asked and shoved him. Thinking the man wanted to fight, he pulled his gun and shot him in the chest. The man was treated at a hospital but didn’t cooperate with the police, so apparently, nothing came of it.

Interesting story here. For starters, don’t instigate or insert yourself into a situation you have no business being in just because you are carrying a gun. It was not his job to investigate people looking for shoplifters. To go interrogating other shipping asking to see their receipt is going too far.

Then there’s the fact that he said he felt like he was being beaten to death. Yet, he refused medical services and stated that his only injuries were”transitory marks, bumps, or bruising.”

After reading all of that, the part that he fired a “test round” seems like it is a bit far-fetched to me as well.

Things aren’t bad enough in Washington State. Sounds like a cop wannabe who thinks just because he can carry a gun that he’s some kind of crime fighter. He needs to be set straight by a judge.