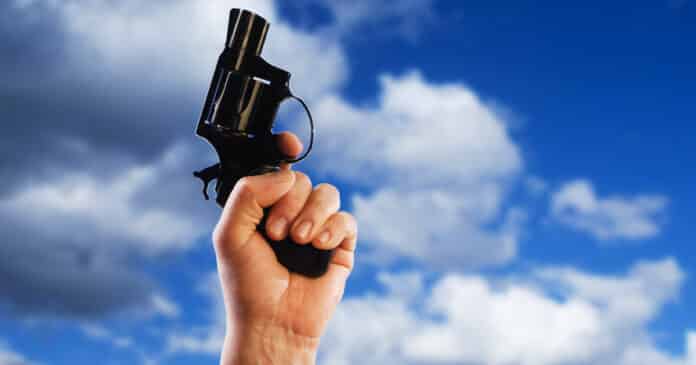 A Mississippi woman came home just before noon and walked into a burglary in progress.

The woman initially fired a warning shot before yelling for neighbors to help call 911. She then went back into her home with the burglar still present and shot at him as he fled.

The burglar was found by police at River City Rescue Mission with a gunshot wound on his right hand. He was then charged with burglary.

The woman likely will not face any charges according to the police.

With authorities saying the homeowner will likely not face charges is something that would not always work this way in a similar situation in another state. Firing a warning shot is almost [probably] always a bad idea. And so is shooting a fleeing suspect.

The woman was armed, fortunately, but firing a warning shot almost negates the reason to even be carrying. When carrying, individuals need to instill that you must be ready to eliminate a threat when deemed necessary instead of attempting to scare them off with a warning shot. These types of shots can also be seen as negligent discharge and/or aggravated assault in other places.

You have to be ready for the unexpected when carrying and therefore trust yourself to know that you need to make the decision fluently to take or not take out an imminent threat.

One could make the argument that shooting a suspect fleeing from a scene prevents any further harm to others, but really it puts an individual at a liability to the law. These two actions by the woman, although taking a criminal off the streets, is something that is not a guaranteed safeguard from any consequences.