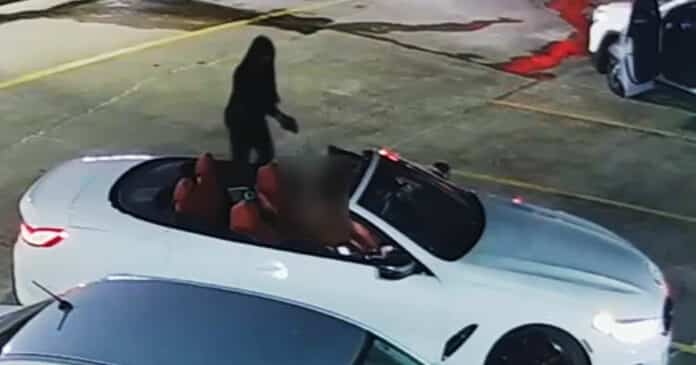 A Houston driver very innocently found himself in the exact wrong place at exactly the wrong time recently. He pulled into a fast-food parking lot to retrieve something from the trunk of his car and was approached by an armed man with his gun drawn demanding his valuables.

It looked like a crime of opportunity as the suspect can be seen backing into a stall near the victim as the victim was standing outside of his car. The suspect came out of his vehicle with the gun drawn while the victim had his back turned toward him. It was a classic example of someone getting the drop on another.

The victim later told police that he resisted and went for his own gun. He was shot seven times by the suspect but was able to return fire and believed that he hit the attacker. He was hit four times in the left leg, once in the right leg, once in his chest, and in his hand. He was able to drive himself to a local hospital. Obviously, he survived to give a statement to the police.

Drawing on an already drawn gun is a risky move, and this time, it could have easily gotten this man killed. Of course, compliance with an armed robber is no guarantee of not getting shot anyway.

This incident is also a good illustration of someone being shot yet still being able to fight back. Resolve not to quit no matter what.

If your going to carry commit to a “carry” mindset…Situation awareness?