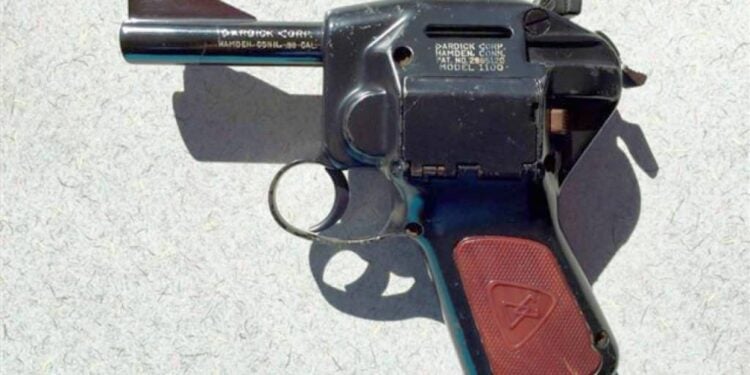 We live in an era of relative conservationism in firearms design. The AR15 in its various forms dominates the semi-automatic rifle market, Mossberg’s 500/590 and Remington’s 870 represent the bulk of the sporting, tactical, and defensive shotguns out there, and while there’s more diversity in the handgun world, let’s be honest: most of you are carrying either GLOCKs or 1911s.

While innovation still exists—see our friends at Hudson—there was a time when widespread experimentation abounded in the industry. As a celebration of the oddities of the past, here’s a list of some of the most unusual firearms out there. 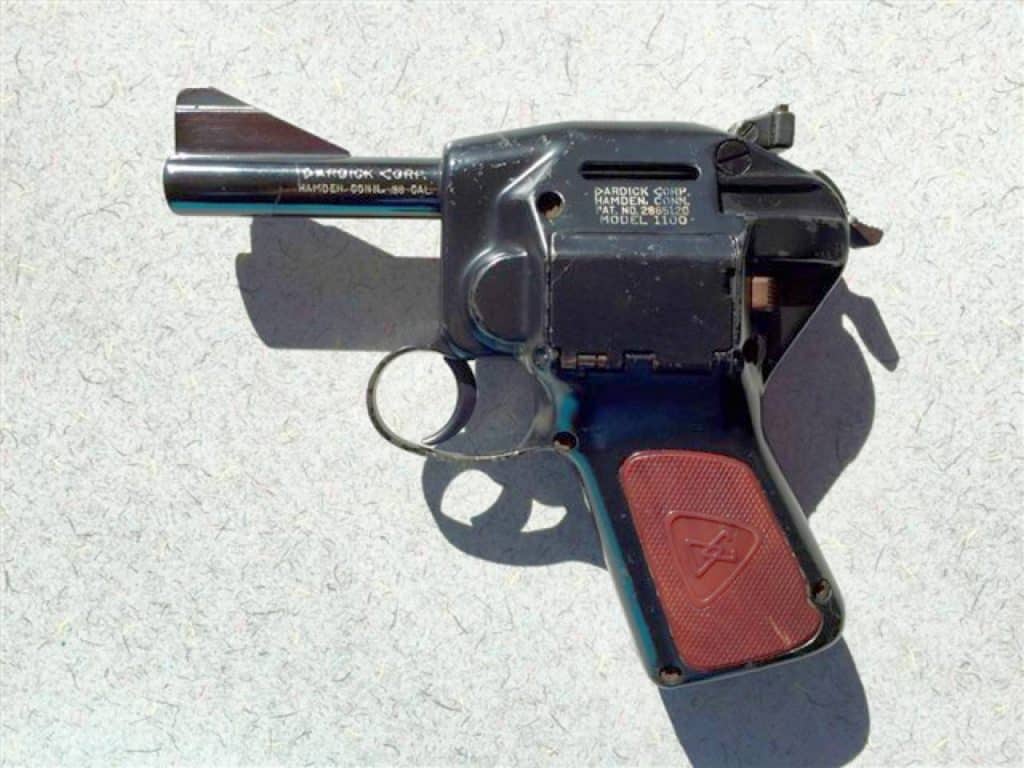 David Dardick accomplished a remarkable feat with his 1958 patent: a genuinely unique cartridge. His three-sided “tround” (triangular round, get it?) allowed for an equally unique chamber, open on one side. This removed the need for a reciprocating bolt or slide in order to load a chamber, thus allowing the creation of the Dardick Model 1100 and 1500: three-chambered magazine fed revolvers. The tround and its revolving action potentially offered some real advantages: higher rates of fire with less wear and tear on the weapon. This, to me, is an exercise in “what might have been”–there’s an alternate dimension in which the tround took off and we’re all shooting very different firearms than we are in this world. 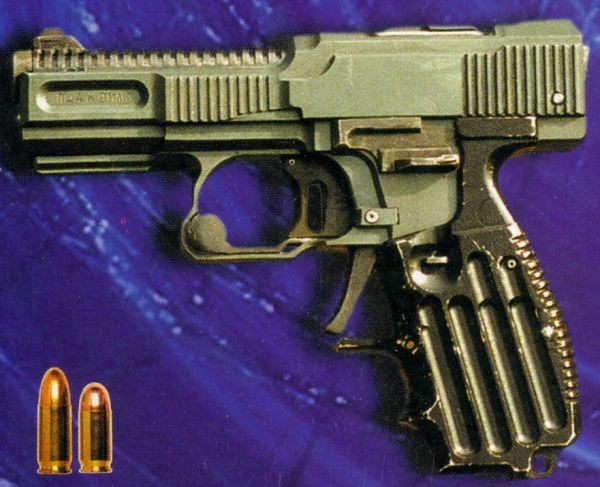 You’ll need to bear with me on this one, it take some explaining.

The Shevchenko PSH-4 is a Ukrainian design which incorporates a variety of it’s-not-a-glitch-it’s-a-feature elements. Designed in the early 1990s, the Shevchenko went back to the drawing board, looking to some of the earliest self-loading pistols for inspiration. It included a two-stage loading system, apparently borrowed from the Gabbet-Fairfax “Mars” pistol of 1898. The gas-operated locking system was drawn from an experimental German design of the Second World War. And then, perhaps the most ridiculous feature: a slide stop that held the slide open when there was one round left in the gun. This was supposed intended to allow the shooter to make a “deliberate last shot”. What that means only God and the designers know.

The Shevchenko is exceptionally rare in the US. I’m not entirely sad about that. 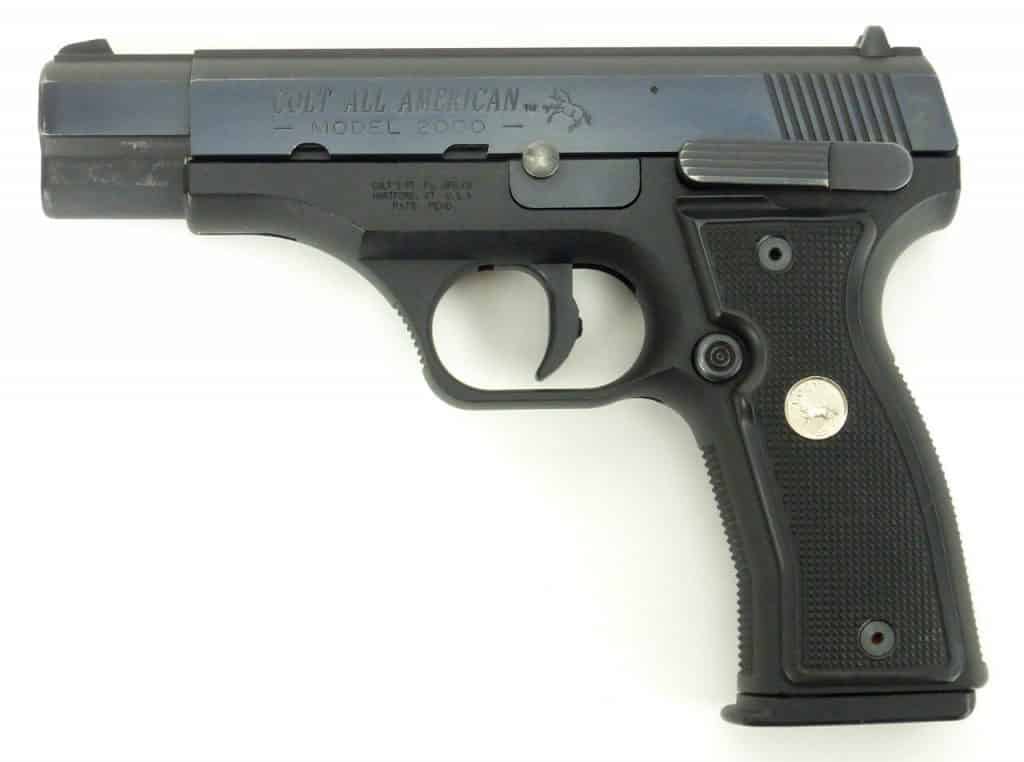 The early 1990s were a very special time, as any of us who were there can attest. Wonder Nines were rapidly taking over the market, and polymer frame handguns were now a force to be reckoned with. Colt, a venerable US manufacture struggling to find its place in this brave new world, designed to enter the fray with its own polymer Wonder Nine.

The end result was the Colt 2000, also known as the Colt All American 2000. Designed by Reed Knight and Eugene Stoner, this semi-automatic pistol came in both polymer and aluminum frame variants. At the time, that would have been interesting enough, but Knight and Stoner also opted for a rotating bolt with a roller-locking mechanism reminsicent of early 20th century French and Austrian handguns. Colt stepped in with their own requirements, insisting on a 12 lb trigger pull rather than the 6 lbs suggested by Knight. The gun, intended to recapture the law enforcement and military markets, missed its aim entirely. Colt historian Rick Sapp refers to the whole thing as “an embarrassing failure” and I’m hard pressed to disagree. 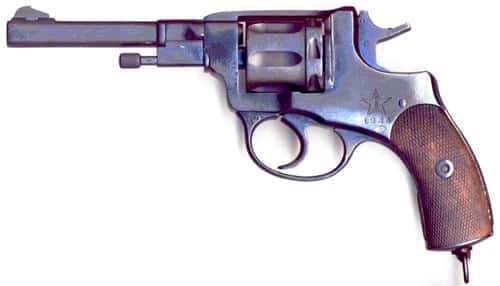 I know what you’re thinking—these were available for less than a hundred bucks not too long ago; what makes them so weird? Well, hear me out—there’s a lot more going on here than meets the eye.

For most contemporary shooters, the Nagant M1895 is just a rather crude Russian revolver. You have to manually pop the spent brass out of each chamber with a tool—hardly the mark of a sophisticated design! However, the features that make this so special are easy to miss.

The Nagant incorporates a “gas seal” system, in which the cylinder moves forward when the gun is cocked. This closes the gap between the cylinder and the barrel, allowing no gas to escape, thus increasing the muzzle velocity of the weapon. Not only does this provide better safety for the user and performance for the projectile, it enables the shooter, should they wish, to add a suppressor to the weapon. Few, if any, other revolver designs allow for this, and I think that’s worth remembering.

As always, the world of firearms is a big one, and there are a lot of guns that didn’t make it to this list. Feel free to share your favorites in the comment section and help us all learn a thing or two about the odd ducks and experiments of the past.