Precision is just as important as accuracy. Precision is being able to do something reliably and accurately is, of course, doing it right. When it comes to defensive shooting, being able to confidently know your rounds are going on target can be extremely helpful. It’s not always just the defender and the assailant in a closed off, sealed room. There are thin walls, bystanders and other things we need to be careful to avoid. So how do you improve your shot groups?

In this article, we’ll go over five simple exercises you can do to improve your shot groups.

A shot group is any cluster of shots on the target. If a group of rounds landed is very close proximity to one another, it’s possible to determine precision. Once precision is established, we can move on to getting that shot group tight in the middle of the target. So, that means we’ll need to first…

Nothing learned, nothing gained, right?

To establish a shot group, place a target out at a known, set distance. For most concealed carriers, 8 yards is a good starting point. 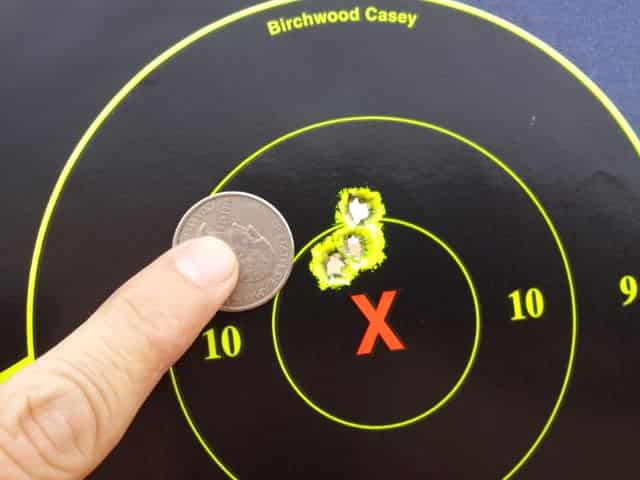 Hopefully, you end up with something like what’s above you. If you don’t, don’t worry. Go back to the fundamentals of basic marksmanship, which are:

If any of these turn out to not be true – don’t worry. All concealed carriers continually work on the basics. Keep firing at 3 shot intervals until a group is established. If 8 yards is proving to be too hard, move the target back to 5 or even 2.5 yards until a shot group appears.

Once you have a shot group, you know how to correct so your shots are more precise.

These are just a few examples to give you some ideas.

Only once you have established a shot group, should you attempt to increase the rate of fire. An increase in the rate of fire is important because it will closely reflect how you will probably fire in a self-defensive gun use.

Much of this activity is the same as the last with the exception of one important change: your breathing.

Breathing is cyclical. As such, depending where we are in that cycle (inhaling, pause, exhaling, pause) we can expect our shots to align proportionally. Once you know where you prefer to be in the breathing cycle when you make your normal shot placement, try holding at that spot when you do a rapid shot grouping.

What we can normally expect is for our basic shot group to widen — sometimes considerably — when we fire at a higher rate of fire. This is because we have less time to get our sights aligned back on target after recoil. It’s okay if your first few attempts look horrible. Pay close attention to the pattern those shots make. Mark your shots on the paper and repeat this exercise until you start seeing a correctable pattern emerge.

These two exercises will tie into the fundamental idea of how we can improve our shot groups.

How To Improve Shot Groups And Shot Placements

Bi-weekly or weekly is preferable. You will NEVER regret it.

It’s not good enough to just say, “my shots suck.” Frustration always happens before the breakthrough.

Firearm safety and the basics of pistol marksmanship never go away. There’s no point where any of us are better than those basic rules that govern how effective we are with firearms.

Some days our shooting is better than others. However, if one particular day we’re struggling with something, maybe it’s a sign we should practice it more before moving on to something more advanced.

It’s much more important to execute the steps properly than execute them quickly. In a self-defense environment, seconds matter. When that pistol goes on target, you need to practice smooth actions so the action is ingrained into your muscle memory.