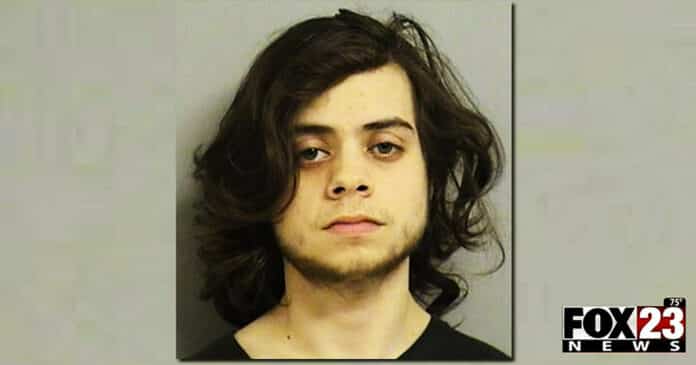 Nikolas Benitez, 21, was charged with 1st-degree burglary and drug possession after Tulsa police officers found and arrested him after breaking into the home of Jeff Bray.

Bray awoke in the morning to his mother-in-law screaming after seeing Benitez standing in their home. According to Benitez, Bray had walked into the house from their garage and went upstairs. As Bray awoke, he grabbed his bedside gun. Once spotting Benitez in the hallway, he began grabbing him by the neck, throwing him down the stairs forcing him outside of the house.

Benitez was yelling as Bray questioned what he was doing in their house, the homeowner reassuring him he could have gotten shot before calling 911. Benitez was found by police at a creek down the street from the invaded home.

“The homeowner could have felt very threatened,” said Tulsa Police Officer Danny Bean. “It could have gone different ways, but we’re glad it went the way it did.”

With a gun in hand, this homeowner definitely displayed a sense of humanity at the very least by deciding not to shoot the invader. He took a pretty big risk making physical contact as well to throw him out of the house. As a gun owner, you have to make sure you establish an area of defense instead of abandoning your sense of advantage. What if the home invader had his own weapon(s) on his person?

Also, as well as locking our doors, let’s make sure we don’t get used to leaving our garage doors open and/or unlocked.

Whatever you have for your home defense weapon as well, it is beneficial to keep them bedside. Bray had a home defense plan ready, but although rather humane, it is a bit odd he decided to physically throw Benitez out while holding his gun. Not everyone will have the ample amount of time to assess a similar situation, let alone actually throw an invader out of their home, so it would be better to keep your distance and be ready to defend your life as well as your family’s at any moment’s notice.