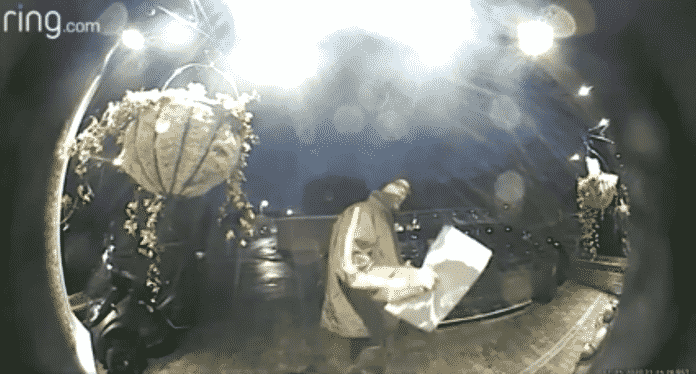 A Ring doorbell video shows just how easy it can be for home invaders to gain access into a home. The attack happened at 9:30 PM this Friday in London. A man that looks like a uniformed driver simply rings the doorbell and waits for the homeowner to answer the door. He even acts like a driver in that he keeps his distance using the Coronavirus as an excuse and then appears to take a photo of the package on the doorstep which is a normal procedure for many drivers.

This is where it all goes bad though. After he takes the photo, he rushes the man in his doorway pushing him inside and then three other armed masked men rush in after him. A lot of screaming ensues as the man is struck in the head with a machete and his 11-year-old son is shot in the arm. Both injuries proved to be non-life threatening so it could have been much worse.

It appears to have been a targeted attack since one of the men can be heard shouting “Where’s the safe?” Despite police searching through the night, the suspects are still on the loose.

The video is embedded below. Warning: It is very graphic toward the end.

While security cameras are definitely worth having as part of your home defense plan, this clearly shows that they will not actually protect you from violent attacks. They only record evidence that is hopefully useful to authorities later. In this case, even checking the camera before the door was opened would have showed what looked like a legitimate delivery.

One clue though could have been the lateness of the hour. A 9:30 PM delivery is getting a bit late for a real delivery to be happening. Another was the man was not asking for a signature. Most drivers will just drop the package, take a photo, ring the bell and quickly leave if a signature is not required. I usually can’t even get to the door to look before they are gone.

Unfortunately, most of us don’t think like criminals (that’s mostly a good thing) and we like getting packages so we don’t hesitate to open the door to see what’s there for us.

Given how quickly all four men rushed into the home, this attack would have been extremely difficult to defend against. Even if you had a gun holstered on your person, you’re one against four who already have their weapons out. If it’s in a safe somewhere there would be practically no chance to access it.

But remember this is London so having any type of firearm staged for home defense is likely impossible anyway. This family was completely at the mercy of their attackers. Funny how all the gun control laws in London didn’t protect this family from criminals with guns and knives. They only rendered them helpless