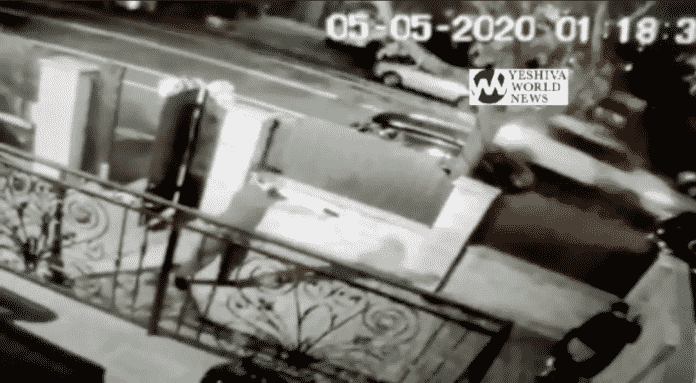 A man living in the Kew Gardens Hills section of Queens was alerted to trouble on his property when his dog started barking at 1:00 AM. The man left his home and eventually found three men inside his fence.

Security video shows the homeowner, gun in hand, chasing two men across his property until they jump a fence. He continues searching and finds a third man approaching from the opposite direction. This third suspect obeys the homeowner’s commands and crouches in the corner of the properties’ boundary wall.

Police arrive seconds later and take the suspect into custody. As this is happening, the homeowner is seen walking around with his gun still in hand. They eventually verify that he’s a licensed gun-owner.

Hit this link for the video.

This is another one of those cases that went very well for the homeowner but is also a very poor example of what to do is this type of situation.

Good for the homeowner for having a dog that alerted them to the suspects on his property. Also good was his wife immediately called police while the man investigated. Good that the yard/patio in question was very well lit, making for good video and easy to observe what’s out there. Very bad for the man leaving the safety of his home to confront what turned out to be three men in his yard/patio. This is always a very risky move, both tactically and legally. Very good for the man waving the police toward him as they arrived clearly, showing them that he was a good guy.

Let me be very bold here. Never, never, ever leave the safety of your home to investigate potential intruders on your property. Call 911, be as good a witness as you can with the 911 operator and let the police do their job.

Though this man probably didn’t know this when he left his home, he was outnumbered 3 to 1. If the suspects had been armed, he would have been at a very serious disadvantage. As it was, they weren’t looking for a fight, and two of them quickly fled. Holding the third at gunpoint runs the risk, especially with your finger on the trigger, of negligently shooting the suspect when they are not at that moment a deadly threat, which could lead to serious charges.

If the homeowner had been forced to defend himself with gunfire, his innocence could have been questioned as it usually doesn’t look like self-defense when you go to the fight. You generally do not have the right to use or even threaten deadly force just because someone is on your property. Deadly force or even the threat of it cannot be used to defend mere property.

Don’t engage if you don’t have to. Win the fight by avoiding it if you can