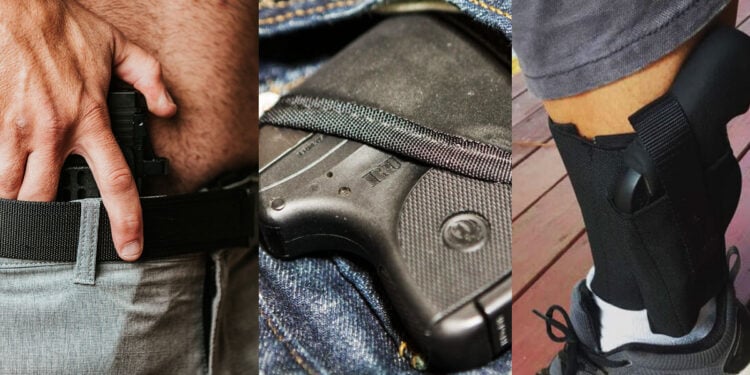 I have come to an adamant and commonly shared opinion that most concealed carriers are best served by sticking with a consistent carry mode at all times possible. Practicing a proficient draw and deployment of the defensive pistol from concealment builds skill in doing so, but also builds a natural response to deploy the gun from that body location and clearing that form of cover garment. The issue, naturally, is that most people can’t accommodate carrying in the same location at all times. For example, if you most often carry in the strong-side-hip position with an open-front garment, you probably can’t make that work if you must dress in business casual with a tucked shirt and no jacket. Therefore, many concealed carriers opt to carry a deep concealment gun in the pocket, on the ankle, or in another carry mode that is used only during such less-usual circumstances.

The problem with changing carry modes is that the individual is now carrying their life-saving device in a body location that is less familiar, and usually far less practiced, in deployment. If you find the need to change carry location, even just occasionally, you need to also practice your draw and presentation from that secondary carry mode. Most often the individual will find it necessary to carry a smaller gun in this alternate carry mode, which further demands additional training.

Although the switch of carry mode may be inevitable for most, there are certain principles that must be applied, universally, to efficiently draw and present the gun:

Finding the Similarities Between Carry Modes

No matter the carry mode or the location of the gun on the body, if the pistol is carried concealed then a cover garment must be dealt with in order to produce the gun. Likewise, a master grip that is secure and confident must be acquired on the gun while it is still in the holster. Further, the gun must be drawn from the holster in an efficient manner that is also safe so as not to flag parts of your own body or flag other innocent people in the vicinity. Therefore, no matter where the gun is carried, these same principles must apply to your ability to draw the gun.

Beyond just the act of drawing the gun, there are safety principles that are, once again, universal between modes. You must use a quality holster that retains the gun under vigorous activity. Consider three carry modes that are completely different in body location; waistband, pocket, and ankle carry. All three modes demand adequate retention from the holster. A poor-quality holster with poor retention, worn on the waistline, can loosen the gun under even moderate activity. The same applies to pocket carry. Guns can fall out of the pocket when the carrier is in motion, or when seated. I have seen pocket-carried guns slip out of the pocket and roll onto the chair. Not good. Likewise, good retention for an ankle holster is a must. In particular, ankle guns have gone skidding along the ground when the carrier must run, and this has happened more than once.

The foremost obstacle to drawing a defensive handgun from any carry mode is clearing the cover garment. This challenge shares more similarities than differences between carry modes. The cover garment must be cleared to make access to the gun no matter where the pistol is worn. Deep concealment, non-standard modes of carry make the access challenge more difficult, but the same principle applies. The typical carry modes that are standard for most people are positions on the waistband, either strong-side-hip or appendix position. Most commonly, guns carried in these locations are accessed by clearing an un-tucked shirt or an open-front jacket or button shirt. Compared to the deeper concealment options, accessing a gun from under an un-tucked or open-front garment is easy. When we must embrace deeper concealment in the form of tucked-in garments or alternate carry modes, clearing the garment becomes more challenging.

Drawing a gun from the waistline from under a tucked-in shirt complicates the draw stroke in as much that it demands the garment be ripped up and out of the pant line, rather than just lifted out of the way. While this accomplishes the same task (clearing the cover garment from the gun) the fact that the shirt is tucked makes it more difficult to do, and less consistent. Thus, clearing a tucked garment tends to be more fumble prone and slower compared to clearing an untucked shirt. With practice, however, it can be done efficiently.

This draw can also maintain consistency with your typical draw from an untucked garment; for example, if you need to carry under a tucked shirt often, you may opt to always clear your cover garment in a method that works for tucked and untucked shirts alike. Many concealed carriers clear the cover garment by grabbing the shirt tail and raising it. This, obviously, will not work for a tucked-in shirt. Rather, grabbing the garment at the navel area and lifting will clear the garment for an un-tucked and tucked shirt, and this similar draw stroke tends to work well, especially for appendix carry. This may be one means of maintaining a similar draw stroke between your standard and deep concealment carry mode.

If you carry a deep concealment gun in the pocket, the means of clearing the cover garment is, obviously, different. There is no actual cover garment to clear; instead, you must get your hand into the garment to access the gun. Drawing a gun from a pocket is slower than drawing a gun from the waistline if you start with your hand off the gun. However, if you start from a prepped grip on the gun, pocket carry reigns supreme for speed to the first shot. The entire benefit of pocket carry is that you can acquire a grip on the gun and look discrete doing it, as you just look like a person with your hand in your pocket. Starting with hand off the gun, however, introduces a challenge to pocket carry. If you do carry a gun in the pocket it is important to practice accessing the gun quickly by slipping the hand into the pocket. Practice this from standing, seated, and other positions, and practice it while in motion.

Finally, ankle carry proves to remain popular for deep-concealment carry, and for backup gun carry. The principles of access are, again, similar in that you must clear the cover garment before gaining access to the gun. In this case, the pant leg is the cover garment and it demands a different approach to clearing than does a shirt. The pant leg must be lifted up to grant access to the gun, and this can be accomplished through several different methods. Ankle carry introduces a further aspect of complication, however, due to the body location. Not only must the garment be cleared, but you must get in a position to access the gun, which involves either bending over and facing the floor or dropping to a knee. Either way, ankle carry will prove universally slower and more awkward than drawing a gun from the waistline. Ankle carry does, however, offer a significant advantage when in a seated position, and it tends to work well for carrying a backup gun.

An Introduction to Ankle Carry

Whatever deep concealment mode you choose, you face the same task in deploying the gun. You must remove the cover garment from the pistol, you must acquire a master firing grip on the pistol, and you must present it efficiently and safely. Consider these principles when you choose and practice with your alternate carry mode of choice.