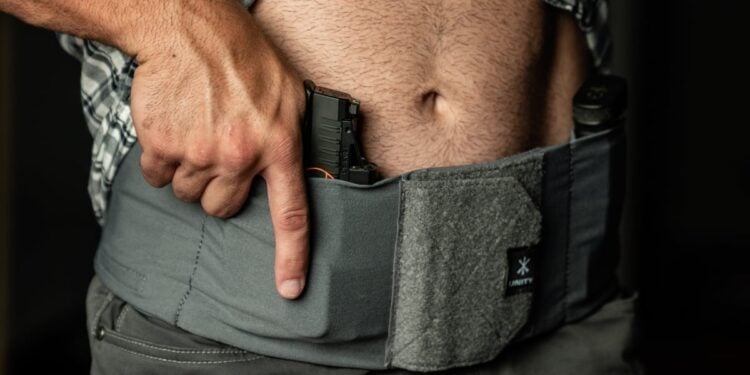 As concealed carriers, we can speak endlessly about our EDC (ever day carry). Instagram and other such platforms are filled with people posting pictures of the items they carry, supposedly, every day. Well, most of us speak less about our DCC.

What is the DCC?

DDC stands for Deep Concealment Carry. While there are apparently some guys out there that have limited professional or social obligations who can get away with carrying their full-size service pistol and multiple reloads every day, most of us can’t do that consistently. Therefore, if you want to stay armed at all times legally possible, you may need to have a DCC that consists of a different toolset better geared for concealment in less permissive environments.

Can you carry your preferred full-size or even compact autoloader when you need to dress for a formal setting with a tucked-in dress shirt? My guess is no. Therefore, a DCC alternative is in order.

I am a firm believer in keeping things as consistent as possible. I prefer always to have the same tool, and keep it in the same place on my body, whenever possible. My usual self-defense tool (Glock 26) does not work for me when I need to dress in tucked-in formal attire. Nor does it work when I wear gym shorts. So, for both formal or athletic occasions, I use my DCC. I find that the gun has to change. For me, the only thing that does not print under a tucked-in shirt is a small frame revolver. Many people do well with an autoloader that is simply smaller than their primary gun.

For myself, a Ruger LCR chambered in 38+P is my go-to option for deep concealment. I also use a scaled-down version of the rest of the toolset that I typically carry. My knife, flashlight, and medkit are all smaller versions of the standard. However, I carry all tools in the same exact body location for consistency, which I truly think is important. If you want to maintain such consistency when adopting a deep concealment set of tools, you might find this strategy helpful.

Here is how I do it:

The belly band. Yup, I know, you hate the idea of it. That elastic thing appears uncomfortable and awkward. However, the belly band may be the answer if you want to carry a gun in deep concealment and have it in the same location as your primary carry gun. This, of course, is based on the assumption that you primarily carry your gun in the waistband, as most people do.

I have tried tuck-able holsters and don’t like them because they still need some kind of low profile clip to attach to a belt. I find that these tuck-able holster options also tend to trap the tucked-in cover garment and make for a more difficult draw. The clip is still visible, no matter how low profile, and you will still need a belt, so how do you use it with gym shorts? The belly band works without a belt.

Now, you might opt to carry a small gun in a pocket or on an ankle when you need to deep concealment. These are viable solutions, and while ankle carry in particular is not ideal, it is better than being unarmed. Still, I like to keep my gun in the same place. Since my EDC gun is worn AIWB under an untucked shirt, my DCC gun is also worn AIWB, but under a tucked-in shirt in the belly band. The draw is a bit different as the tucked garment needs to be ripped out of the waistline before you can retrieve the gun. But this is quite efficient with some practice. For use in athletic wear, the gun is worn in the belly band but under an untucked gym shirt. And this draw in this circumstance is essentially the same as my standard draw with my daily carry gun.

The belly band gives anyone who carries AIWB or strong side hip a means of carry consistency for their deep concealment needs. Most traditional belly bands provide only a sown-in elastic pouch as a holster. And this works fine for use with a revolver or double-action gun. But I have reservations if using a striker-fired gun in such a setup. Some band designs integrate a hard holster shell. These are better suited for use with a striker-fired gun to ensure proper safety.

Along with the different gun, I use several other tools that hide better and do not create a conspicuous bulge under a shirt or in the pockets of dress pants. As part of my standard carry, I typically wear a small fixed blade knife in the waistband and a spare magazine in the pocket in a dedicated pocket magazine pouch. I also carry a light clipped in the same pocket and a medical kit in the other pocket.

These tools are too big and heavy for deep concealment carry. So my alternative is a smaller knife attached via velcro to the belly band, a speed strip for the revolver reload, and a small, but still considerably powerful, light. The speed strip and light get tucked in a pouch the size of a wallet, that only prints as such. And it is so light that it can go in the pocket of gym shorts without a problem. Likewise, a compromise with my medical gear and carry only a tourniquet instead of a full trauma kit. This stripped-down and smaller toolset allows me to carry my usual tools under any circumstances.

This setup gives me the ability to carry everything in a consistent place. When I need to deeply conceal my tools to accommodate formal or athletic wear, I can do so rather seamlessly. The compromise is that each tool is smaller and inherently less capable, but still far better than being unarmed. Give the belly band some thought. It might work for your deep concealment needs as well.