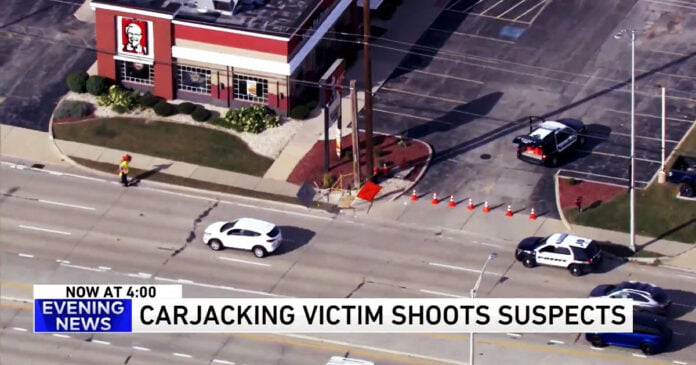 An Oak Park, IL man was the victim of an armed carjacking around 5:45 AM in that Chicago suburb.

Police reported that the victim fired shots at the carjackers as they sped away in his car. One was hit in his left leg and is listed in fair condition. The other was hit in the shoulder and back and was considered in serious condition.

Police also said that the victim has a valid FOID card and concealed carry license.

In my non-legal opinion, he potentially won’t have that concealed carry license for long.

While being faced with two armed attackers would certainly be considered an imminent deadly threat, that window of imminence has closed once those attackers are driving away. The threat they posed is no longer there, and therefore a deadly response is no longer justified.

I think we can safely infer that the victim decided not to go for his own gun while in the presence of the armed teens, as drawing on an already drawn gun is extremely risky. If that was the case, then the outcome shows that he made the right move as the teens drove away without harming him.

Where things could get really dicey for our victim (depending largely, I suspect, on the mood of the County Prosecutor) is how the criminal justice system chooses to look at his actions. While he was certainly a victim, could he then be looked at as an attacker in a second fight he initiated? Could he be charged with reckless endangerment with a firearm? How about 2nd-degree attempted murder?

Please remember that justifiable deadly force can only be employed to defend against an imminent deadly force attack. What deadly force is the victim being threatened with as the teens speed away in his car?

May I suggest that the initial fear of death or great bodily harm was quickly replaced with, “How dare you do this to me?” and the shots he fired were an attempt to stop the teens from “Getting away with this”?

The car was found a short distance from the scene, but I wonder if the holed he put in it, and the potential legal costs will be worth it in the end. Use your gun to defend life, never just stuff.

I definitely hear what you saying but Man that’s tough they committed a crime against him stole his car at gun point and he shoots at them he can go to jail, don’t seem fair to me but I know that’s our great system…. Crazy

About the only spin I can think of to justify firing on a fleeing perpetrator who is no longer a threat to oneself is to claim defense of the public or defense of the State. These two armed criminals having just committed one theft by threat of deadly force could now be on their way to another similar or worse crime.

However, for that spin to stick would require our victim to have some objectively reasonable basis to make that assessment, and even then remains a difficult defense to make without hard evidence. If our victim had, for instance, a recording of the perpetrators stating flatly that they were on their way to commit a murder, that would be a solid basis for claiming defense of the public. Another possibility is our victim witnessing the perpetrators using the vehicle to harm others in public, such as swerving toward pedestrians or ramming another vehicle off the road.

In any event, it doesn’t sound like that is the case here. Good luck in court, dude. You’re gonna need it. And next time–if there is a next time for this man–exercise better judgement.