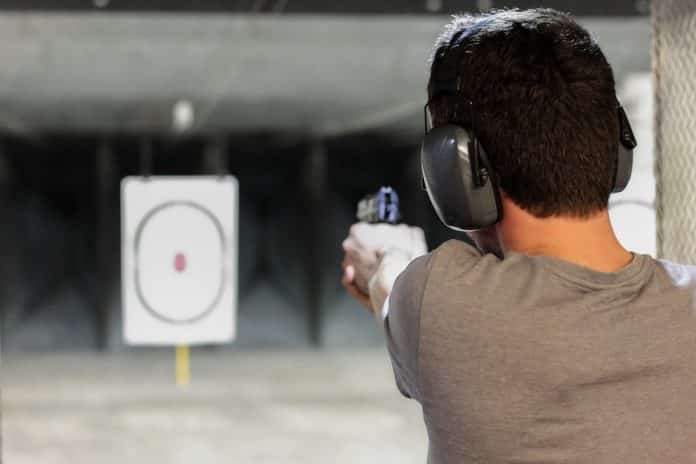 The last article I wrote, Practice with a Purpose, resulted in some very nice comments, but one comment drew my interest and caused me to give it a great deal of thought. The comment was this:

Can you recommend any ccw drills for indoor range users?

This comment didn’t really relate to the article, but it was an interesting question that caused me to put some thought into the dilemma of honing your skills in an indoor environment. I thought I’d take a minute to address the indoor range shooting environment, as it applies to CCW and defensive handgun practice.

Unfortunately, some things do, in fact, limit us from training in indoor environments. Safety and liability concerns on the part of commercial range owners and gun clubs have resulted in the institution of some rules, restrictions and operational practices that, by their very nature, limit the amount realistic defensive training that can be done on an indoor range.

One limiting factor of indoor ranges is that of movement. Anyone involved in any kind of advanced shooting program will understand that movement is encouraged. Shoot, then move is a common theme in defensive shooting exercises. Movement, however, is kind of limited on an indoor range where you must remain in a booth.

Another limiting factor is not being able to shoot across lanes to engage multiple targets. Many indoor ranges are designed to deflect bullets from straight on. Hitting the backstop at an angle could cause unpredictable bullet travel, and create a dangerous situation for everyone on the range at the time.

Perhaps the most significant limiting factor is that many indoor ranges limit drawing from a holster, whether concealed or exposed. I, like many other instructors, advocate the idea of training as you carry. If you carry concealed, this would mean training from a concealed carry position. I understand, however, the reasons for this restriction, both from a safety and a liability standpoint.

One thing that I have found is that many ranges that have this policy may be willing to waive that position upon certain conditions, such as demonstrating the ability to perform these functions safely on an indoor environment, or maybe allowing it if you’re the only one on the range at the time. Before you accept it as an absolute, talk with the range owner, or in the case of a gun club, you could speak with the Chief Range Safety Officer or governing body of the club.

If you are stuck on an indoor range, with all of the restrictions that come with it, don’t give up. Even with the limitations, there is no reason that you can’t train effectively on an indoor range. You have options, some of which are specifically suited to training in an indoor range. How you deal with the indoor range is all a matter of how you decide to approach it. Instead of being a hindrance, it could actually be a great training opportunity.

Your draw can be practiced at home (in a safe area with an unloaded gun or training gun). In reality, there are very few “wild west quick draw” encounters. So training with the pistol in your hand, as opposed to in the holster, is not necessarily a limiting factor. Yes, ideally you should be working on any skill from a concealed holster, through to the shot, then a return to a concealed holster. But if you can’t, then there is nothing wrong with starting from a ready position.

Let’s face it, once the gun is out of the holster, all of the other manipulations are the same whether you are indoors or outdoors. So, practice the draw at home, then when you get to the range you can practice everything from a “ready” position.

So if we can work from a ready position, what defensive skills can we do on an indoor range?

As many of you know, I advocate practice with a purpose. I don’t believe in just heading off to the range and blowing off a few hundred rounds of ammo. I like to have a plan.

When working indoors, I also work with a plan. Three live fire drills I do on a regular basis are:

This type of shooting practice is especially valuable if using a firearm that changes the trigger pull after the first shot – the traditional double action/single action pistol – as this first shot is commonly the one that goes awry.

These types of shots are at the foundation of all defensive shooting, and very few of us actually take the time to practice in a focused manner on these basic shots, even on an outdoor range. If you’re restricted to shooting on an indoor range, make the most of it by focusing on the foundation shots and making the foundation solid.

Yes, reloading can be done indoors. One of the great advantages of reloading indoors is not having to clean the sand out of your magazines. And who among us couldn’t use a little more practice reloading? Practice the three common reloads, the speed reload, tactical reload, and reload with retention (I know, there are some that will argue that the last two are the same thing – they’re not, but that’s not the purpose of this article).

Reloading is one of those areas where many people are deficient, merely because of environmental factors. Be honest, when you’re outdoors do you always let the mag drop? Or do you worry about the magazine picking up sand and getting that sand into your gun? A great advantage of the indoor range for reloading practice is that you can concentrate more on your reloading technique and less on how much dirt is in your magazine. Letting the mag drop on a speed reload becomes less of an issue, so you’re more likely to do it.

Another weakness many shooters have is the ability to quickly and effectively clear a malfunction. By using dummy rounds in the magazine, you can induce stoppages, and practice clearing those stoppages, all on an indoor range. Imagine how much better you’ll be after an afternoon spent focused on nothing but clearing stoppage after stoppage.

An added benefit of this type of training is that you also get to focus on trigger control. When that dummy round comes up, and the gun goes click, pay attention. Did the gun move? Or did you maintain trigger control? Malfunction clearing drills are one of those things that have many added benefits, and it is a drill set that is well adapted to the indoor range.

One well placed round from low ready? Two shots in two seconds? A shot, a reload and a second shot in four seconds? Your own sick, twisted imagination only limits the options (see, I know you).

If you’re fortunate enough to have a system that will allow for 360-degree target rotation, you could hang a “shoot” target backed with a “no shoot” target, and set the program to face either at random. Introducing some target identification/decision making to your training makes it more realistic and relevant.

If the range does not have programmable targets, you can still bring a shot timer and do timed drills. Shooting within specific time limits helps to induce a bit of stress to your shooting. It introduces a sense of urgency which is well suited to defensive shooting, and, again, can be done effectively on an indoor range.

I must confess an affinity for low light training. Unfortunately, the outdoor range where I shoot does not allow shooting after sunset; something about upsetting the neighbors or some such thing.

Enter the indoor range, where the environment is generally lower light than an outdoor range, to begin with. The lighting conditions are also, usually, user variable. That is, you can turn the lights down, or off.

Many indoor ranges will have a simulated barricade that can be placed in the booth, allowing you to shoot from simulated cover. If your range has this as an option, make sure you are clear on the rules and restrictions for this type of shooting at your particular facility.

All these things can be done on an indoor range, and all have practical applications to defensive shooting. But if you really want to make use of your restricted environment, start combining some of these ideas to develop your own indoor courses to maximize your training.

How about a Mozambique Drill with an induced stoppage, using low-light conditions, from cover, with a time limit? Yes, on an indoor range. Applicable to CCW/Defensive Shooting? Absolutely.

The first step in trying to develop a plan for your indoor training is to speak with the range owner and determine what they will allow, and what they will not. Often just the mere fact that you took the time to ask the questions will be a clear indication to the range owner that you are serious about your training, and this may, in turn, get you a little more leeway than “the guy off the street.”

Let me close by saying that there is very little in the shooting world that is truly unique. There is no one right way, and no one right opinion. Further, defensive situations are rarely ideal – forcing you to improvise and adapt to the situation as it unfolds. So don’t look at your limitations on an indoor range as obstacles but as an opportunity to adapt to and overcome the obstacles, and become a better shooter in the process.