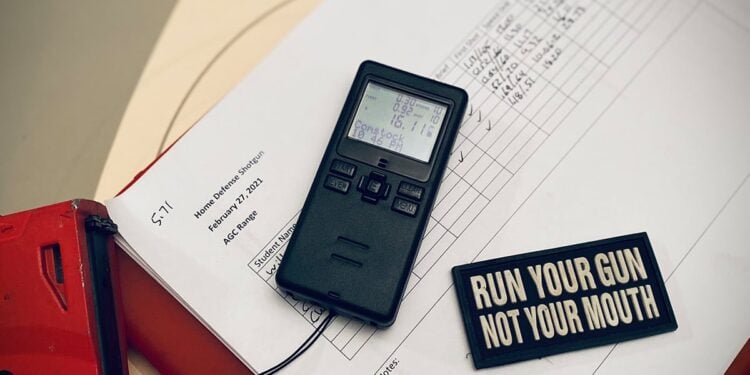 Anyone who is serious about proficiency with a firearm likely has a shot timer. They are invaluable for tracking performance over time and analyzing whether or not certain skills are actually being improved. If you google search “shot timer”, usually the Pocket Pro II will be the most common result. Somewhere in that pile though will be the CED7000. I have been a long-time user of the Pocket Pro series of timers. I wanted something different though, and it seemed like if someone wasn’t using a version of the Pocket Pro, they were running the CED, so I followed suit.

What’s in the box

The CED7000 is quite a bit smaller than most other shot timers. It is about the same size as an old Nokia 3310 cellphone if you are old enough to remember those. This smaller size is welcome, as it takes up less room in the range bag.

The CED7000 will come with two lanyards, one short and one long, and a charging cable. That is pretty much it. I assume the small lanyard is to run off the wrist, although I am not sure why, and the long lanyard is run around the neck. I haven’t found much use for the short lanyard. The long lanyard works well around the neck if running a long gun, or using a handgun without concealment. When running concealment, especially from the AIWB, the timer hangs in the way of clearing the cover garment and can change the dynamics of the draw.

Fortunately, the battery life so far has been pretty good. I have only had to charge the timer a few times over the past several months. I imagine over time that battery life will become less and less though. That is the norm for other rechargeable devices at least.

At the core of any shot timer, is the ability to give a start signal, and then track the shots made. The CED7000 has no trouble here. Even when dropped in a pocket because I forgot the lanyard or something, it still picks up the shots. My one gripe is that the start signal only has two settings. Loud, and less loud. I prefer to have more variance in the start signal for use during dry fire. Especially if I am trying to do my dry fire and not bother other people in the house (the beeps get annoying apparently).

What Makes it Different

The thing that sets the CED7000 apart from the other predominant shot timer on the market is the programmability. The Pocket Pro and Pocket Pro II may be reliable and (mostly) rock-solid timers, but they are very limited in their functionality. Just within the PAR time settings, there are three different ways to set up PAR times with the CED7000. I can run just a normal PAR, which is easier to set up than other timers already, or I can set a series of PAR times, even a series of PAR times to run automatically.

There are also different timer modes. Comstock is the default mode and works essentially like we expect shot timers to work. The one that I find particularly useful is the Combined-Comstock mode. In this mode, the timer will automatically add together several strings of fire. For example, on the IDPA 5×5, there are four strings of fire, but all I really need to know to score the drill is the total time at the end. I could record each time individually and add them together at the end, like with a normal timer if I really wanted to. The CED7000 will do the math for me with the Combined-Comstock mode though. It will give me my total time, and then all I have to do is calculate my points down to get my final score. Not having to stop between strings to write times down is big news to me. Maybe I am just lazy though.

The other feature of the CED7000 that I really appreciate is the memory function. It will recall past strings of fire, even if it has been turned off. As an example, I was on the range yesterday using the timer to run several drills. Today, I pulled the timer out of my range bag and looked back at the times for the last 10 drills I ran. This goes back to not having to write times down all day while on the range. A string of fire may 5 seconds to run, but then another 30 seconds to a minute are spent writing down the time before moving to the next string. There is value in the time savings, especially when range time is limited.

There is an 18-page manual that comes with the timer, so I will save some of the other features as a surprise so you read the manual when you buy one. I have just picked out the highlights. Suffice to say, the functionality of the CED7000 outclasses the other timers I have used, if functionality is what you are looking for.

Where the CED7000 might fall short is that it does not seem to be as robust as some of the other timer options. So far, I have not had an issue with durability, but I have been careful to not drop or otherwise abuse the timer. There are silicone sleeves available as an accessory, and I made a point of having one on the timer as soon as I started using it. There are also clips, wrist bands, backup battery packs, etc. available to go with the timer too. They all cost extra coin though. The cost of the CED7000 is probably what has kept it as a less popular timer. It will run about $30 more than the competition at $130 or so retail. To me though, the increased functionality is worth the $30. Probably worth more, but don’t tell the people selling the timer.