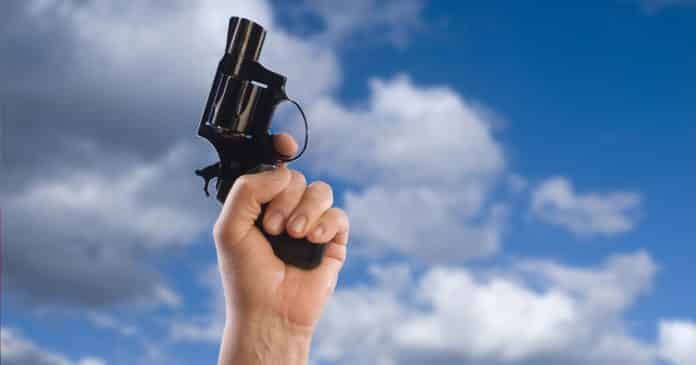 A bit before noon on a Wednesday of last week, a woman was awakened by her neighbor repeatedly ringing her doorbell. It seems she had parked her car in such a way that it blocked her neighbor’s driveway and the neighbor was not very happy about it. Since the neighbor was loudly threatening her, she took a revolver with her as she went to move her car.

The neighbor apparently kept threatening her and according to police, it got to the point that she feared for her life and that of her infant so she fired one shot into the air. It’s not clear who called the police but when they arrived they arrested the neighbor who they said had alcohol on her breath. The neighbor was arrested and charged with breach of peace. She had been arrested twice back in October on minor assault charges.

Police said the woman’s warning shot was lawful under Castle Doctrine since she feared for her life on her own property.

The most relevant in this case would seem to be imminence. The deadly attack has to be happening now, in the moment. Not just threatened. And the neighbor would also have to have had the means, the opportunity, and have demonstrated the intent to bring a deadly attack. The neighbor was not armed that we know of.

The problem with warning shots is that they are intended to change someone’s behavior. They are a warning to “back off or I’ll shoot you” which means the threat has not yet reached the level of deadly force. If it has, the defender would in fact be defending themselves instead of taking the time to fire a warning. Besides, that round in the air has to land somewhere and that could lead to recklessly endangering others.

Warning shots are never a good idea. Either you are justified in using your gun to defend your life or you aren’t. If you aren’t then the gun stays in the holster.

You have no way of knowing if the drunk neighbor threatened her with a knife or a gun or a baseball bat. She could easily have taken a weapon back into the house before the cops arrived.

You don’t know how threatened that mother felt with her baby in her arms or in the car. Being screamed at by a drunk woman may have made her fear for her life and the life of her child.

Being “in fear of one’s life” is a matter of perception and depends on the people involved and the situation. You may not be “fearful” of a 20 year old thug approaching you, screaming curses because you’re young and strong. I’m 70, so my perception of the threat will be different from yours.

In my opinion, which by the way, agrees with the police in this case, the woman did nothing wrong. Other than firing her gun into the air. It would have been smarter to fire it into the ground.

But there are myriad stories in which a warning shot has stopped a threat and if I can scare someone off by firing a shot into the ground, I’ll sleep better than if I killed someone.

There’s no indication that the neighbor who was arrested did anything other than yell at the other person. She probably didn’t, since she was arrested for breach of peace, and not assault or any crime involving the brandishing, use, or threatened use of a weapon. So there’s no evidence that there was an imminent threat.
I’d be more sanguine about this if the threatened woman had fired into the ground, but she fired into the air. Apparently she, and you, have not heard of gravity. People have been injured and killed by bullets that were fired into the air. Firing a round into the air is a blatant violation of Rule Four: Know your target, its surroundings, and your backstop. So the woman could be charged with whatever the South Carolina statute is regarding reckless behavior that could cause injury.

kinwolf,
I agree with Roy about this. You were not there and a witness to the crime. Standing on the sidelines and making calls after the fact is not good.