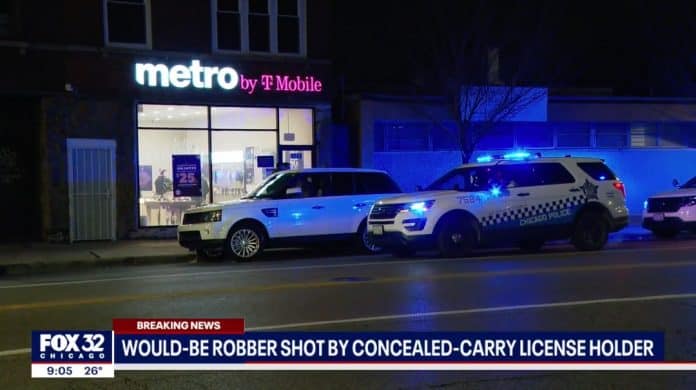 The day after this past Christmas, at about 7:00 PM in Chicago an armed man entered a cell phone story apparently with robbery on his mind. He wasn’t successful as a 29-year-old man already in the store drew his legally carried gun and shot the suspect twice ending the incident.

The suspect was taken to a hospital in critical condition but did not survive his injuries.

Police confiscated the permit holder’s gun but there was no report of his arrest at the scene. It was not known if the permit holder was the owner of the store, an employee or just a customer.

I know it’s been said a bazillion times but again some of the toughest gun control laws in the county had no effect in stopping this armed robber from threatening innocent lives with a gun. A concealed carry permit holder did.

Of course it’s unfortunate that the suspect died but that was the result of him making the decision to threaten others with deadly force.

Another point to notice here is that if you are involved in a shooting incident your gun will be taken as evidence. Do you have a backup? Some trainers say you should have two of whatever you carry so that if one goes into evidence (quite possibly for an extended period of time if you ever do get it back) you’ll have a second that you can still use to protect yourself.

Something to think about.

Or – scary thought – you don’t allow the criminal to have a gun in the first place. The circumstances that you retell would not have occurred in US gun regulations were not so slapdash.

Good luck on that. Evil people will use whatever they have to commit a crime. Look at the mass stabbings in the UK. You can’t use laws to inhibit criminals from committing crime.

Can’t help but notice the sign by the store’s door: “NO FIREARMS ALLOWED ON THIS PROPERTY”

WHO CARES!!!
ALWAYS CARRY TO
PROTECT YOURSELF!!