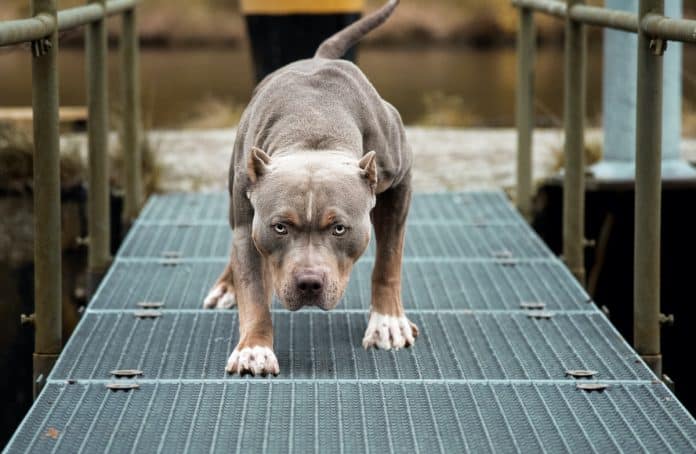 A couple was out for a walk around 1:00 PM with their Australian Shephard in New Castle, PA when a Pit Bull broke free from its tether and attacked their dog. The couple tried to physically get the Pit Bull off of their dog but were unsuccessful. The Pit Bull reportedly retreated twice but then attacked for a third time.

It was at this point that the husband pulled his .380 pistol and shot the Pit Bull in the hind end intending to only stop the attack. He told police:

“[it] came running full charge at us and snapped its cable. I didn’t want to have to shoot the dog. I didn’t want it to die, but I shot it to stop it from attacking my dog. This dog was on a mission straight to hurt him. My dog is my child and part of my family, and I’m going to protect him”. VIA NEW CASTLE NEWS

The Shepherd did not suffer any serious injuries but the Pit Bull died at a veterinarian emergency room. Witnesses and both dog owners all told police similar versions of the events.

The local police chief conferred with the Lawrence County District Attorney’s office and both concluded that the husband was justified in shooting the Pit Bull because he had a right to protect his animal.

Wrong! On all counts. This man is very fortunate to have gotten a favorable ruling from the local authorities. Please do not use this story as an example of what’s permissible when it comes to defending your pets.

Legally, pets are considered mere property. I know that most pet owners consider their dogs and cats in particular to be a part of their family but, under the law, they are not. They are property and the use of deadly force, except under very specific circumstances in Texas, is not justified to protect ordinary property, ever.

This man caught a break in this case as he could have been charged with reckless endangerment, (other people were present) discharging a firearm within City limits or other such like. He still could potentially face a civil suit by the Pit Bull’s owner.

Had the Pit Bull attacked the man or his wife or a child that would have been a different situation. You’d still have to be able to articulate that the attack was deadly in nature but then you’d be defending human life and self-defense using deadly force would be justified.

As far as our pets are concerned, pepper spray is possibly your best option. Sorry, I know that doesn’t sound fair or right but it is the law