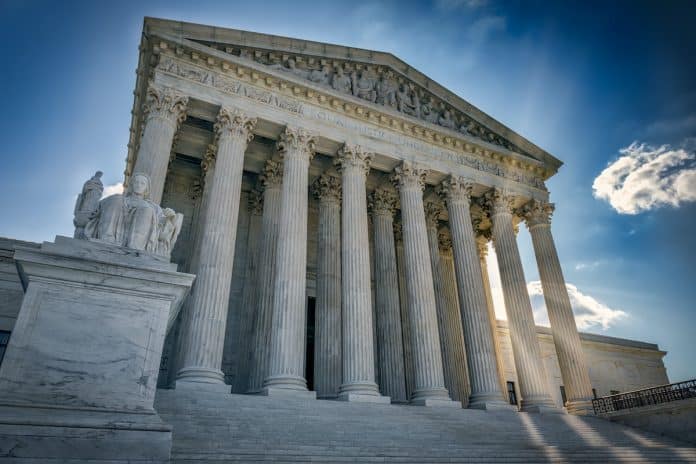 There are only a few Supreme Court cases involving gun control, and one of the most pertinent is United States vs. Miller of 1939. For those unaware, this court case concerns whether or not the government can regulate what type of firearms you can own.

We all have our opinions or beliefs about this topic. US vs. Miller is one of the few times the Supreme Court has had anything to say about it, which – of course – has the force of law.

This is not to argue for or against the Supreme Court’s decision, the National Firearms Acts, or any type of gun control. For the moment, we’re going to set what you or I or anyone thinks should be to the side. This is about how things are.

United States Vs. Miller: The Background

The background to United States vs Miller starts with the National Firearms Act of 1934. The first NFA was passed in the backdrop of Prohibition (and the Great Depression) when there were almost no firearm regulations; you could literally order a Thompson SMG and have it mailed to you. Saw off a shotgun barrel or shorten a rifle, add a suppressor…no big deal.

But…there was a REAL problem at the time with organized crime. Criminal organizations like the Chicago Outfit (Johnny Torrio’s and later Al Capone’s gang) could afford Thomson SMGs (around $2,000 with inflation) and armored cars, whereas the typical police officer usually had only a .38 Special revolver, and this was in the days before speed loaders.

Not that there wasn’t any firepower in police inventories, but by and large, the national body of law enforcement was under-equipped and under-gunned.

Congress passed the NFA to give law enforcement the edge.

The Case: US Vs. Miller

In 1935, Jack Miller, along with co-plaintiff Frank Layton, were arrested in Arkansas and charged with – among other things – transporting a sawed-off shotgun across state lines without having the proper tax stamp. The case was initially dismissed on the grounds that the NFA’s provisions violated the defendant’s Second Amendment right to bear arms.

Many people, of course, are of the same opinion and will probably say so in the comments; the judge at his trial did likewise. However, the case was appealed by the government and went up the judicial ladder until granted a writ of certiorari and heard by the Supreme Court of the United States in May 1929.

The issue before the Supreme Court was considering whether the regulation of the form of a firearm (e.g. a sawed-off shotgun) infringed on the defendants’ Second Amendment rights.

The government contended that the purpose of the Second Amendment was to maintain the ability of the people to be armed for duty in the militia and thus for military purposes.

Since a sawed-off shotgun has little to no military application (as opposed to a combat shotgun) it doesn’t apply, and the court rendered an 8-0-1 decision that it did not, with Justice James McReynolds writing the opinion and Justice William Douglas abstaining.

“In the absence of any evidence tending to show that possession or use of a ‘shotgun having a barrel of less than eighteen inches in length’ at this time has some reasonable relationship to the preservation or efficiency of a well regulated militia, we cannot say that the Second Amendment guarantees the right to keep and bear such an instrument. Certainly it is not within judicial notice that this weapon is any part of the ordinary military equipment or that its use could contribute to the common defense.”

What this means is that firearms considered outside “ordinary military equipment” are, according to the Supreme Court and therefore (unless changed by act of Congress or constitutional amendment) the law of the United States, not necessary for a person to be able to carry and bear arms.

Therefore, there is no right to own or possess one as far as the government is concerned, since it doesn’t fit what the Hughes court felt was the scope and intent of the Second Amendment’s protections.

What happened to Miller, you ask?

Jack Miller was using his sawed-off shotgun to commit a bank robbery and turned state’s evidence (and testified against his co-defendants) when the case got to trial. The shotgun charge was disputed by his and Layton’s attorney on the grounds that the NFA – the means by which he was charged with the crime – was an infringement. Miller was found murdered in April 1939, the month before the case was heard.

This isn’t to say the layperson doesn’t have a valid viewpoint. This is to say that there’s what the layperson thinks the Second Amendment means and what SCOTUS says that it means, the difference, of course, is that SCOTUS decisions have the force of law.

Granted, there’s a good reason for that.

The judiciary branch is supposed to be a bulwark against what James Madison termed the “ill humors in the society,” meaning the transitory and irrational passions of the public; the vox populi (or as William Sherman called it, the vox humbug) is not their guiding star. The judiciary branch was literally designed to NOT be influenced by popular sentiment.

So, what does this court case mean?

It means that, insofar as the current laws and court precedent of the United States are concerned, there CAN be limits on what kind of guns you can own. Since there are clearly some firearms which have no purpose that the Framers even remotely intended for anyone to carry and bear (even by a distant transitive property) there are some firearms that therefore enjoy no Second Amendment protection.

Exactly what those limits are? The court has barely touched on the topic since then. DC vs. Heller found that handguns definitely were, but the court also declined to hear a legal challenge to Maryland’s 2013 assault weapon ban, which could have extended that same protection to semi-auto rifles.

Who knows what future decisions will hold.