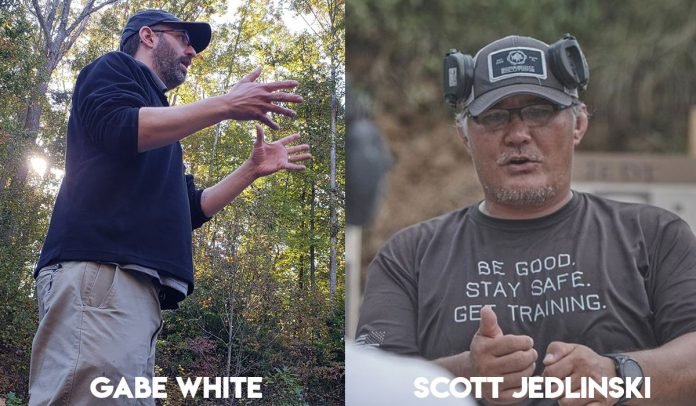 When it comes to technical gunslinging, Gabe White and Scott Jedlinski (Modern Samurai Project) are near the top of the heap, if not the top of the heap. In the training world, the only real distinction between the two is Scott is the red dot guy, and Gabe is the iron sights guy. The cool thing is that they have ranked standards in their classes, and that is what we are talking about here.

Gabe White has pins that he awards in his classes based on shooter performance on a set of standards. The highest rank is the Turbo Pin. Gabe has 4 standards, or tests that he uses, all shot at 7 yards.

Scott Jedlinksi, also uses standards in his class (no surprise there given the title of the article). The highest level is the black belt. The MSP standards are intended to be shot from concealment, so there isn’t a time bonus for running legit gear. The par times are what the par times are. Scott does allow what I call a “cheater start” though. It isn’t really a cheater start, it is just being smart and setting ourselves up for success by prepping for the draw without it looking like we are prepping for the draw.

So, who’s standards are harder? If you notice, they share a lot of similarities. That should say something about the skill of the instructors, and what they believe to be possible. This is very high-level shooting. Gabe set his standards based on what he believes a Grandmaster level USPSA/IPSC shooter should be able to pull off. That says something.

We can try to hash out who has the harder standards on paper, but I think that is really not the right way to do it. The right way to do it is to take a shot timer, a couple hundred rounds of ammo, and hit the range, which is what I did. I was running a Sig P250 (don’t laugh too hard), out of a JM Custom Kydex Wing Claw 2.0, and shooting Federal 147gr Syntech ammunition. Every test was shot from concealment.

I shot through all of the standards for both instructors. I was able to hit more of the Turbo pin standards than the MSP Black Belt standards. It really came down to the 0.25 seconds bonus time for shooting from concealment on Gabe’s standards. That quarter second is what got me by for all of them. I was only able to get one of the MSP standards, the 3&2 Drill at 3 yards. Mostly because it is close enough that it is really all about hand speed. The sighting can be pretty rough and still pull off the needed hits. Scott’s 25 yard one shot drill in 1.5 seconds absolutely destroyed me. I was within a tenth or two on all the rest, but not even close on that one. It has earned the title of being my nemesis at the moment.

So who do you want to see in the showdown next? What other instructors have some high-level standards for their classes? Drop your suggestions in the comments section.