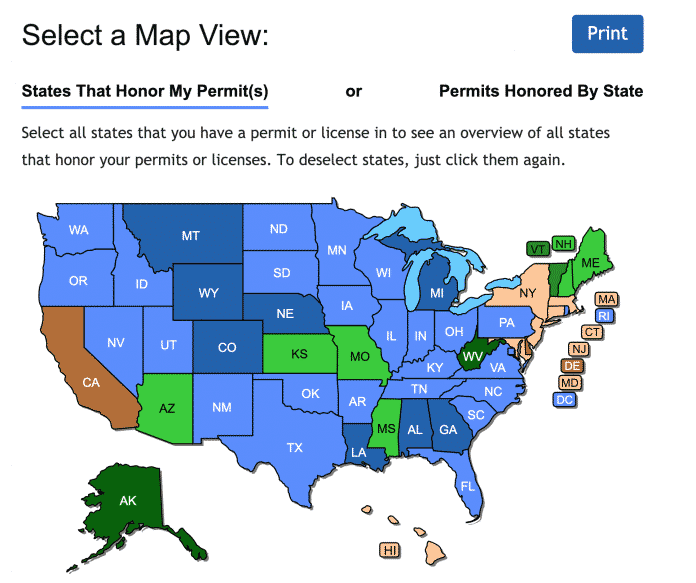 Back in 2007, I created USA Carry to help other people like myself that had an interest in defending themselves and their loved ones by getting a concealed carry permit and also helping them navigate the each state’s laws including reciprocity with other state’s permits.

No one quite had an interactive map at the time, and it quickly evolved to become a popular resource for concealed carriers to know which states they can carry concealed in. Over the years we continued to develop new features and keep the maps updated.

And today, I’m happy to announce that we have launched our newest version of the  Concealed Carry Maps. This new version has some new features and some behind the scenes upgrades that make it easier and faster to use.

One of the main new features is allowing states to have multiple permit types. Some states have resident and non-resident concealed carry permits, and this was always an option when selecting permits on the maps. But some states have multiple types of permits such as South Dakota which has a Regular, Gold and Enhanced permit all of which include Resident and Non-Resident versions bringing the total available permits to six. The new Concealed Carry Maps now allow users to select the exact type of permit they have, not just resident or non-resident types.

Some additional features are that is it easier to use on a mobile device now. There’s no need to install an app on your phone and keep it updated to make sure you have the latest information. Just bookmark the Concealed Carry Maps on your phone, and you will always access the most up-to-date version possible. You can also print the maps or save them as a PDF if you would like an offline version.

We will continue to work hard to bring you the best concealed carry maps and resources available for free. Actually, we have already started working on the next version that will include more new features that I cooked up while trying to get this latest version out. If you have any feedback or suggestions, please contact us here. So keep an eye out for updates coming soon!