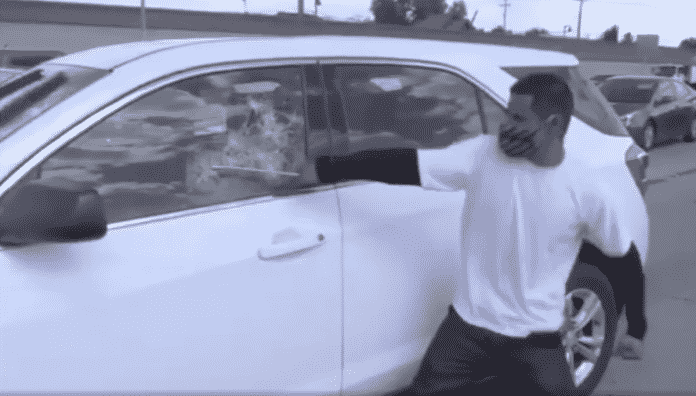 As the riots that started in Minneapolis have spread across the country, some of those committing the violence have left the neighborhoods and taken to stopping traffic and shutting down roadways and then attacking the stopped vehicles with blunt objects heavy enough to smash out windows.

So the question gets raised, “Would a deadly force defense be justified in that kind of situation?

Before I go into that, let me say that your best defense against any kind of attack is to see the threat far enough out to be able to take action to avoid it. But for some reason, drivers tend to drive right up on a traffic jam until they have to stop, and then they become trapped in it. If you see the road ahead blocked by people and especially if there are people in amongst the stopped traffic, slow down, stop if you have to, and look for a way off that road – by any means you safely can. Let go of the mindset that you “have” to get through there.

I just watched the video above that took place in San Jose, CA, where rioters blocked a multi-lane roadway and then started attacking the cars they trapped. What I didn’t see were any cars at the end of the jam backing up to getaway. Everyone seemed fixated on trying to get through the jam. While some cars were truly stuck with nowhere to go, others looked to have clear paths of escape to one side through a ditch or even room just to turn around and drive the wrong way. It looked like people were more willing to suffer the attacks than to break a traffic law. Of course, cars are still approaching the jam, so the longer anyone waits to try to escape, the fewer the options that might be available.

But what if you do find yourself caught in a riot induced traffic jam with no way out? Is deadly force justified? To use the standard line of every lawyer ever asked pretty much any question, “Well, it depends.” Let’s analyze what you might be facing.

A blunt object heavy enough to smash out a window can certainly be considered a deadly force threat, especially if they keep swinging inside the car after the window is gone. That same attack is definitely immanent in nature. It’s happening right now. You are an innocent victim since you don’t know the attacker, and they picked you randomly out of a number of other potential targets. You can’t avoid or run from the attack because you are trapped in your car, and other attackers surround it. Would a reasonable person also be in fear for their life and the lives of their family if they were with them in the car? Even more so if children were present?

Given the above, a good case could certainly be made that you are facing a deadly force attack. But, as always, a deadly response is the absolute last resort to save life. The added danger of a mob attack is that once you are forced to shoot, you will attract even more attention from the crowd that will then use your act of self-defense as a reason to escalate the attack on you further and probably with more numbers. Imagine a Walking Dead scene only with the attacks moving a lot quicker.

Remember, a mob is not rational in any way. Everything they do is justified in their minds, and anyone that hurts one of them, for any reason, is not.

Could you exit your vehicle and make a run for it? Maybe. With your kids? God forbid. Are you physically fit enough to make a run for it? As hard as this might sound, maybe your best bet could be to abandon your vehicle before it comes under attack and then try to blend in with the crowd as you make your way out of the area as quickly as you can.

Every situation is unique, but whatever you decide to do, do it quickly and decisively. Time is not on your side.