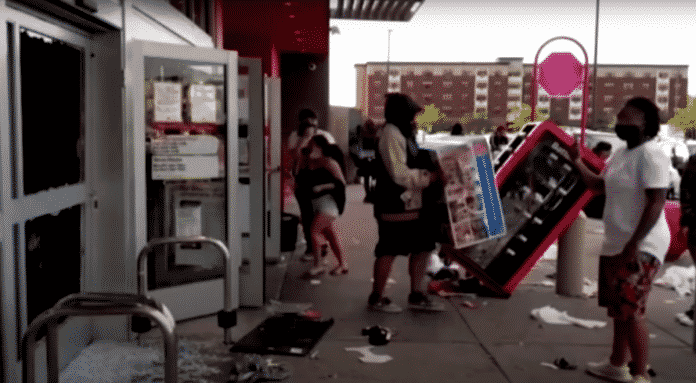 As most of you have probably already heard, a protest over police brutality in Minneapolis, MN, turned into a riot. Vehicles and buildings were burned, and a number of businesses were destroyed and looted. One video I saw showed a long stream of looters, leaving a nearby Target store with shopping carts heaped full of merchandise taken from the store’s shelves.

There was one report of a store owner that was arrested after shooting an alleged looter and an interview with some men that come into the area armed with the intention of protecting businesses from the mob.

The events of the last couple of days have prompted some thoughts concerning concealed carriers and violent mobs.

First, I have to say that I’m not an attorney, and I’m not a psychologist, so the following are my own comments based on my own personal experiences. Your mileage, as they say, may vary.

To quote a line from the first Men in Black movie:

“A person is smart. People are dumb, panicky and dangerous animals”.

And an angry mob is perhaps the worse manifestation of group behavior there is.

Yes, individuals make up a mob, but within that context, for whatever reason, individuality seems to yield to the general intent of the mob. Individuals lose their inhibitions and gain a sense of empowerment and a lack of any sense of responsibility for their actions, at least in part because they are not acting alone.

I’ve personally witnessed people watching a crowd doing illegal things say to the effect: “They’re doing it, and nothing is happening to them, so I’m going to do it too.” And then go and join in on whatever the crowd is doing. I believe that looting is like that. People that normally wouldn’t attempt such a thing see looter after looter carrying out whatever they can and think to themselves, “Why not me?”

So what does all this mean to us as armed citizens?

I wrote all of the above to try to help you to see that an angry mob, meaning individuals within it, will not act in a rational manner and are capable of extreme levels of violence. This means that you must do whatever you can to avoid one. It cannot be reasoned with. It cannot be de-escalated. Its sheer numbers often overwhelm entire police forces.

It matters not how skilled you are or how many rounds you’re carrying. You can’t win a fight with a mob. You must not allow yourself to get caught up in one. If you are aware of trouble in an area, then simply don’t go there. It matters not how important you think your business is there or how much you think you have a “right” to go there. It’s just not worth the risk. Stay away.

If you turn a corner in your car or on foot and find yourself looking at a mob, trust your Spidey senses and turn around and leave, quickly. Mobs are not always in just one group. You could be in the middle of something and not immediately realize it.

Pay attention that you don’t get caught and blocked in by traffic. Make a U-turn. Drive across a median or a sidewalk if you have to but get out of there. Your vehicle offers very little in the way of physical protection. Windows are easily broken, and a mob can quickly pull you from your car. And don’t forget that your car can be used as a defensive weapon against the deadly force threat of a mob.

If your life is threatened, then you’ll have to defend yourself, of course, but try to do so in a way that will help you affect your escape from the situation.

Don’t go anywhere with your gun that you wouldn’t go without it and pay attention to what’s going on around you, especially when you already know that there is trouble lurking around town.