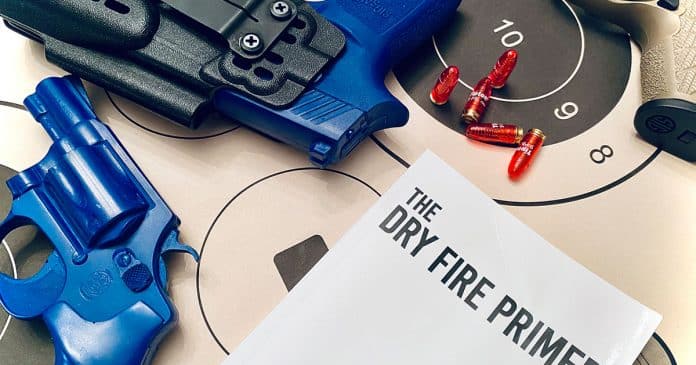 With ammunition being the way it is, we are all probably spending less time on the range and more time working as much skill as we can in dry fire. For some people though, who are new to firearms or never bothered with dry fire before because they could just go shoot real bullets, here are some things that might help you out.

I know what we are all thinking. It is just dry fire, it isn’t rocket science. Well, actually… Nope, it still isn’t rocket science, but it is easier than you might think to screw ourselves up with some poorly executed practice. It is important that we do this thing right, and this is the book that breaks it down and tells us how to do it right. I have been shooting guns and learning how to shoot guns at more than a casual level for over a decade. I still read the book. You should too.

Or a red gun, or yellow gun, or whatever. Most people probably just use their actual carry gun for dry fire. That is okay, as long as we carefully follow the right safety protocols to keep us from putting unwanted holes in things. This usually means only practicing in certain areas, and at certain times. Use of a blue gun, or dummy gun, is just an easy way to remove as much of the risk involved with dry fire as possible, and give us a little more freedom in our practice routines. It will let us do many of the things we would do with our real gun, just minus the trigger press and risk of a negligent discharge.

These are what our blue gun shoots. Just kidding, that actually doesn’t work. I tried. They are really for working reloads when we feel like we need to reload better. That does usually mean using an actual real gun to dry practice, so make sure you follow the safety rules outlined in the Dry Fire Primer. This is not the time to get lazy, cut corners, or pay less than perfect attention to what we are doing.

On some guns, it may also be a good idea to have some sort of dummy round or snap cap in the gun anytime the trigger is pressed. Most modern striker fired handguns, not a big issue, there can be exceptions though. Just make sure you understand the particular do’s and don’ts of your chosen firearm to keep from unintentionally damaging it.

There is one thing notably absent from this list, a shot timer. That isn’t by accident. I am all about driving performance and using a timer to push our skill to the next level. Even though I am all about shot timers, I think it is easy to fall into overemphasizing the time component and focusing too much on the result, and not enough on the process.

Our focus should be on mastering the process. This is practice. Then we test. That is where the timer goes. We analyze results, then we go back to the process to clean it up some more. We should be focusing more on the process of skill execution than the results. Sometimes the presence of a timer will skew our focus in the wrong direction. At some point, you will need a timer, but I am not yet convinced it is needed right off the bat.

So there you go. Hit Amazon, buy the stuff you need, then get to work. I doubt ammunition will get any cheaper anytime soon. All this stuff will cost you about what two boxes of 9mm cost right now, and you will get way more value than a 100 rounds of ammunition can give you.