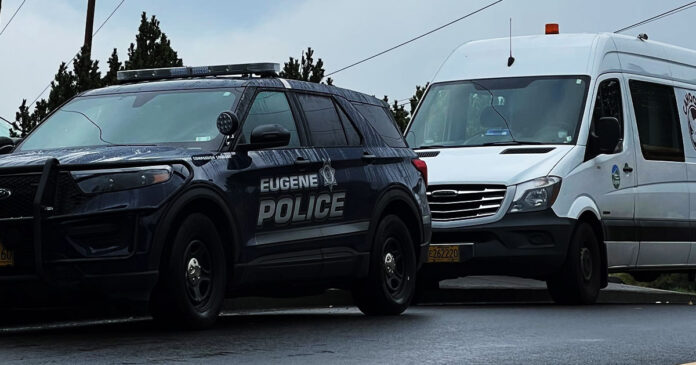 It’s not uncommon to learn that abusive ex-husbands are that way, at least in part because of mental health issues. Unfortunately, these issues often don’t manifest until later in the relationship. That’s often why they are exes.

A 28-year-old ex decided one evening sometime after about 10:00 PM to drive about five and half hours to an old apartment in Eugene, OR. that he once shared with his ex-wife. Arriving around 3:40 AM, he began pounding on the door loud enough to not only awaken the young couple inside but also other residents in the complex causing them to call 911. Not getting a response, he then began pounding on the apartment’s windows, demanding to see his wife.

She didn’t live there anymore. The 21-year-old man who lived with his girlfriend told the man that his wife was not there and asked him to leave. The ex didn’t believe him and continued to bang on the window until he broke it. He then entered the apartment.

The 21-year-old had armed himself and continued to ask the ex to leave. Instead, the ex advanced toward the resident, apparently making death threats. When he refused to stop, the resident fired two shots which caused the ex to stop but only for a moment. When he advanced again, the resident shot him for a third time, stopping the attack. The ex died at the scene. Investigations revealed that the ex had a history of mental illness and at least one previous psychotic event.

The 21-year-old resident and his girlfriend cooperated with police, and the County District Attorney’s office said there would be no criminal charges filed.

It would seem very improbable that this young couple had any idea who lived in their apartment before them, and they couldn’t have had any idea that the ex would come back to break in and threaten them, but this is why so many Americans keep a defensive firearm in their home.

This 21-year-old appears to have acted to protect himself and his girlfriend by the book. He waited until the ex broke into the home and presented a deadly threat. He only fired until he initially stopped the threat and only re-engaged when the threat continued and then only fired the one round needed to stop the threat again.

While it’s true that the odds of this happening to anyone are very small, the results of not being prepared, at least in this case, could have been catastrophic. Owning a defense firearm is not about being paranoid. It’s about being prepared for the unexpected.