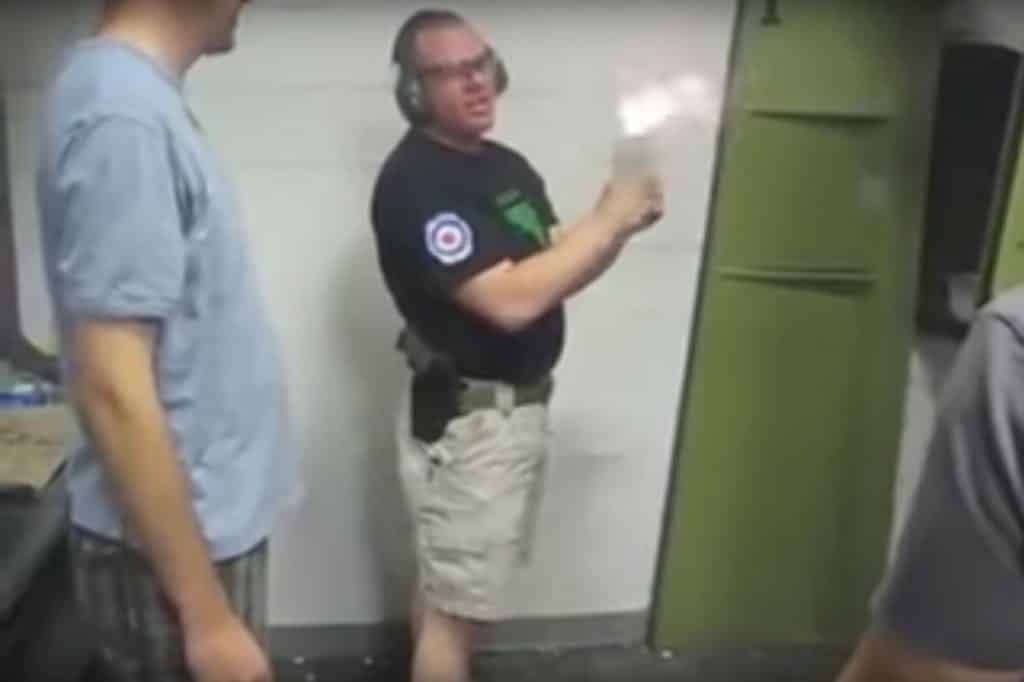 Despite the fact that accidental shootings have reached an all-time low, recently there has been a string of accidents from the people we should least expect a negligent discharge: Firearms instructors.

One instructor in Michigan may face charges after accidentally shooting a man during a CPL class.

The instructor unholstered his gun during a demonstration, pointed it at the door and pulled the trigger, unaware that it was loaded.

The bullet struck a man in another classroom, going through both legs.

The careless instructor may be charged with negligent discharge of a firearm—a misdemeanor offence. And if convicted the he could face jail time as well as have his concealed pistol license revoked.

Another firearms instructor recently shot himself while holstering his weapon at the NRA headquarters in Fairfax County, Virginia. He suffered a lower body wound but was not facing charges.

And though this reportedly occurred in 2010, chances are that you’ve seen this video floating around the internet lately. In it, a firearms instructor accidentally fires his .44 magnum as he is teaching a class.

At the start of the video the instructor is explaining how to grip the pistol. He looks like he is about demonstrate how to fire double action, then steps back and, almost as an afterthought, pulls back the hammer to demonstrate single action. As he’s talking to his students he puts his finger on the trigger and pulls. The gun (thankfully pointed upwards) nearly whips him in the face. There is some nervous laughter and someone asks him in he meant to do that.

“Yeah,” he says. And he looks like he needs a new pair of pants.

Aside from breaking at least two of the four rules of gun safety, what else went wrong?

For one, this instructor was simply not paying attention to what he was doing. He was so involved in what he was saying he was not concentrating properly on what he was doing. One of the four laws is to “know your target and what is beyond it.” This also means that you must be aware of your surroundings and concentrate on what you are doing.

The other, equally foolish, mistake he made was that he did not own up to his blunder. As an instructor it is his job to ensure that his students understand fully how to safely handle firearms—and that includes calling out other people if they mishandle a gun.

Never hesitate to point out and stop negligent behavior to ensure your safety and the safety of everyone around you.

The takeaway is that a negligent discharge can happen to anyone, even the most knowledgeable instructors. But by following the four laws of gun safety with constant vigilance you can minimize the chances of an accident.

The four laws of gun safety are:

When the NRA went to the hybrid curriculum a lot if not most ranges found that it was very difficult to impossible to continue with classes using the new curriculum. This has led to unqualified, non credentialed indivduals instructing trusting students using phony mostly off the cuff lesson guides if they use any guidance at all. In each of these senerios discussed in this article, when is it ever acceptable to have live ammo in any classroom??? I would describe these individuals simply as charlatans chasing the dollar and not instructors of knowledge of firearms with the emphasis on safety.
Thank God the NRA has recognized the error of their ways( chasing the dollar) and brought back instructor based curriculum with the emphasis on safety according to their charter.
Before you sign up for firearms training, verify the curriculum and the instructors credentials. Make sure that both are legitimate and not identified solely as an employee of the range.
With that said, as a student of an NRA course make sure that you have received all of the instruction outlined within the student handbook. There is no such thing of a 1-2 hr NRA basic firearm course. More like 6-8, anything less and your being ripped off and short changed of important information, safety knowledge and skill building.

30 years ago I was in the USMC, So I was familiar with being on the range from that experience. However when I started getting interested in shooting last year (2016) I knew I had to brush up on my gun safety. I watched countless hours of gun safety and gun laws video on the internet. I realize not everyone can learn that way but I think there is more than enough information on the internet to make new comers competent about gun safety.