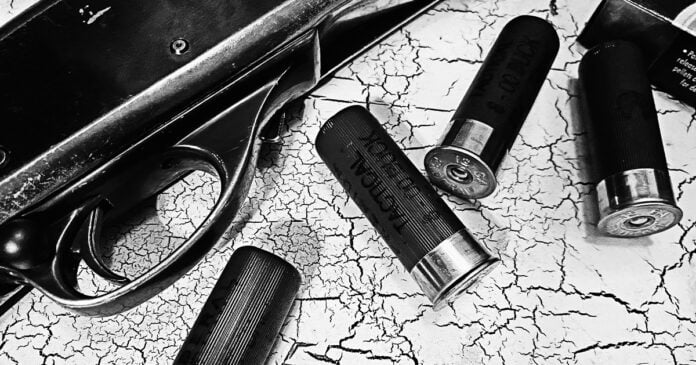 There are plenty of buckshot loads out there that we can use for personal defense. Some are certainly better than others though. They shoot tighter patterns, they recoil less, and they function in more guns. Ask anyone who still pays attention to shotguns, and the load that always comes up is Federal’s 8 pellet 00 buckshot FLITECONTROL (product # LE13300).

Through the use of a plated and buffered shot, a rear braking wad design, and low recoil, Federal’s 8 pellet FLITECONTROL load generally delivers exceptional patterns even at 25 yards out of otherwise unremarkable shotguns. It has single-handedly doubled the practical range of the cylinder bore defensive shotgun, and made chokes and other barrel modifications nearly obsolete.

I have discussed most of the features that make Federal’s FLITECONTROL loads so good in other articles about load selection or specific shotgun loads, so I won’t rewrite what has already been written. Instead, I will focus on addressing the concerns that come up with extremely tight patterning buckshot loads, and the one thing that FLITECONTROL has that most other loads do not, a rear braking wad.

Where the Wizard Lives

Where Federal’s wad design differs is that there are not any petals at the front of the wad. Instead, they are at the back, and as the wad leaves the muzzle of the barrel the petals at the back of the wad spread out, sort of resembling a shuttlecock. The air resistance pushing on these petals is what eventually pulls that wad off the pellets. Since this is a delayed action though, it holds the shot together for longer, and the pellets do not have as much time to spread out before impacting the target.

Now this pattern performance does not come for free. FLITECONTROL wads do not typically play well with choked guns. For optimal performance, use them with a cylinder bore gun. Running choke on the gun will usually lead to larger or more erratic patterns when using a FLITECONTROL load. Usually.

But don’t I want the shot to spread out a little? I am only using these guns for home defense and that use case usually puts me at pretty close range to the target. Why would I want a tight pattern?

The Reality of Patterns

That is not the reality of how these things typically go though. When a load of shot impacts a three-dimensional target, the shot tends to spread out from the point of impact. This was observed by Mas Ayoob and mentioned in his book Stressfire II way back in the early 90’s. Mas refers to this phenomenon as the “billiard ball effect”. When the shot hits the target, it is like the start of a game of billiards. Things tend to not stay together. In the book, he backs this up with some rather gruesome autopsy photos of a person killed with a point blank blast from a 12 gauge shotgun loaded with 00 buck. Incidentally, this is also why buckshot is preferable to slugs in a defensive use shotgun, assuming we can maintain pellet accountability. Which brings us to the next point.

Reasoning Behind a Tight Pattern

What a tight pattern does give us is easier projectile accountability, and greater margin for error. Assuming we all agree that we do not need to miss the target, making it easier to keep up with what leaves the muzzle is a good thing as long as we are not giving up the effect on target we are hoping for. A consistently tight pattern helps us to do this.

A tighter pattern also means that if I screw up my shooting somehow and push my shot a couple inches one direction or another, I am still keeping all my pellets on a 6”-8” target at 30-45 feet. Accountability is important, because misses come with consequences, one way or another.

This consistently tight patterning performance, combined with relatively low recoil and reliable function in most guns, is what makes Federal’s 8 pellet FLITECONTROL load the king. It puts everything together in a single shell. Good shootability, good reliability, and exceptional pattern performance. At this point in time, it is unmatched in what it can deliver from almost any cylinder bore shotgun. The problem is, it is also hard to find. Especially right now. If you are able to find some and you want the best of the best for defensive shotgun loads, scoop it up.