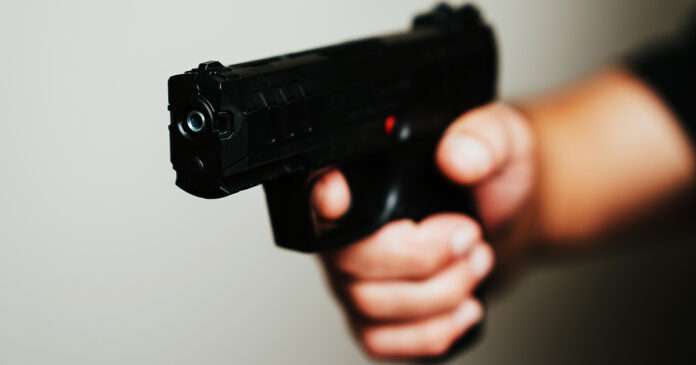 A Wichita, KS QuikTrip was the scene of some excitement about 2:00 AM on a recent Friday morning. It seems an armed security guard attempted to remove a 23-year-old woman from the store when she drew a gun and pointed it at the security guard several times.

The woman was treated at a hospital and will be booked upon release.

It turns out the woman’s weapon was only a pellet gun.

That, however, is irrelevant. What justifies the security guard’s use of deadly force is did she reasonably believe that she was facing a deadly force threat from the woman she attempted to remove from the store. Many pellet guns look remarkably like the real thing. One does not have to determine if the gun is real before taking defensive action. If it’s being used as a real gun, I can’t imagine how you couldn’t assume it is a deadly weapon.

Also, and forgive me for this; a pellet gun is capable of shooting your eye out (sorry), which in every way would be considered great bodily injury.

Frankly, this security guard would have been justified shooting the woman the first time she pointed the gun at her. That she allowed it to happen multiple times shows that she exercised enormous restraint and only used her own weapon when she felt she had no choice. That’s just my opinion, of course, based on what we know from this story. Perhaps in-store video tells a different story.

Without seeing the video. One would may have to assume a couple things. First. The Security Guard was stupid and very well could have been killed. The perp “pointed the gun at her several times”!!!??? Once should be enough. I mean, if you want to live. Second. The Security Guard did not shoot because she knew or suspected it was a pellet gun. If that is the case. She has a lot to answer for. I would think. Someone “shows” a gun? Maybe (you hesitate). Someone points the gun at you? You’re pretty much already dead if you do not react immediately. JMO