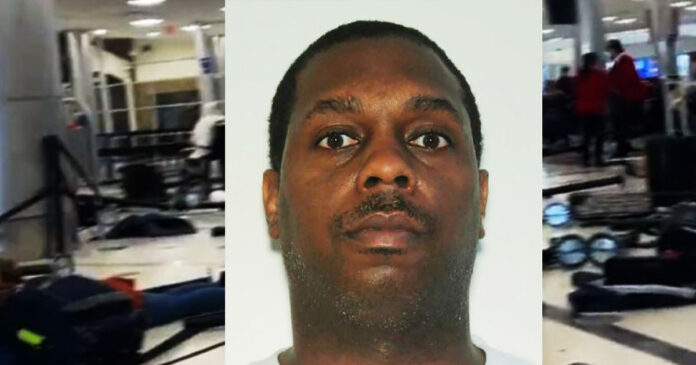 This past Saturday, travelers got a scare when a firearm was discharged at the security checkpoint of Hartsfield-Jackson Atlanta International Airport. The thing is, apparently, it wasn’t the fault of the felon who pulled the trigger. It was the NRA’s, according to Shannon Watts.

An unintentional gun discharge in the Atlanta airport caused mass panic today among passengers who thought there was an active shooter.

Kenny Wills, a convicted felon, had a firearm in his checked bag when going through security. His bag was flagged for a secondary search after going through the X-ray machine. As a TSA agent started to search through his bag, Wills lunged for it, and at some point, the gun discharged. All reports seem to confirm that it was a negligent discharge and not an intentional discharge.

Wills then fled the security checkpoint with the gun and was able to escape through the front doors. But not before dumping the firearm in a trashcan where it sat until it was found on Tuesday. Wills is still on the run as the manhunt continues and has been charged with carrying a concealed weapon at a commercial airport, possession of a firearm by a convicted felon, discharging a firearm, and reckless conduct.

An outstanding member of society right there.

But according to Shannon Watts, this is the NRA’s fault for a Georgia bill that was passed in 2014 called the Safe Carry Protection Act of 2014, aka ‘Guns Everywhere’ Bill. Now let’s actually take a look at what this bill allows.

In short, this bill allows anyone with a Georgia concealed carry permit as well as those from other states with licenses or permits that Georgia accepts to carry a firearm into “bars, churches, school zones, government buildings and certain parts of airports.” While permitted within airports and the Transportation Security Administration checkpoint lines, firearms are still not permitted within the secure area.

So now we know what this bill covered. How in any way, shape, or form does this apply to a convicted felon who forgot a gun in his checked bag going through airport security? It doesn’t. But all of this was left out of her tweet. So anyone doing drive-by headline reason would read that and think, “Oh, the NRA backed a bill that allows everyone to carry guns everywhere, including airports.” And that simply isn’t true.

While this type of rhetoric isn’t surprising coming from Watts, I found it necessary to take a few minutes while on a plane flying home today to research this “guns everywhere” bill, which simply took one Google search and explain what it actually allows. After reading this, if you still think the NRA had anything to do with this incident, share your thoughts in the comments.

Colorado has the same places that are acceptable….It has caused no problems. People are stupid in Atlanta. The last time I checked a gun and went thru the TSA in Atlanta so I could fly the agent asked me about the gun and would not touch it. Train the TSA agents about guns. Guns are not going away! You may want them to go away but it’s not going to happen in my lifetime

I’m licensed for concealed and I often carry at the airport when I go in to pick up family and friends. That’s very different than trying to smuggle a gun onto a plane. Sheesh!

He is a felon, carrying a weapon illegally? That makes a law abiding organization guilty? Yes, that is hard left liberal logic for sure. Always blame your opponent for that which you are guilty.

There right you can’t fix STUPID!

Can’t fix it, but you can cuff it, taze it and shoot it.

Unless you’re Madison Cawthorn, you can fix it

Shannon Watts is a total nutjob

Is anyone really surprised that Watts – or most anyone from that party for that matter, would make a comment like this?