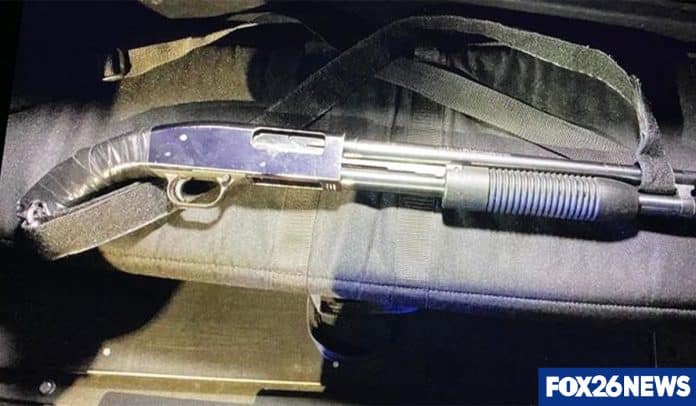 About 5:30 pm yesterday, Fresno, CA police attempted to pull over a speeding car. What should have been a routine stop turned into a short chase as the driver refused to stop and soon after crashed his car.

As reported by FOX26NEWS, as the suspect exited his car, he produced a pump shotgun and fired a couple rounds at the officers before running away on foot. Unfortunately for the bad guy, he unknowingly ran toward a California CCW holder that happened to be walking down the street in his direction.

The good guy with a gun drew his gun to defend himself against an obvious deadly force threat. He fired one shot hitting the suspect in the chest which caused him to fall to the ground. He didn’t stay down though and was able to get back on his feet and run to a nearby apartment complex where he tried to break into someone’s apartment.

At this point another Good Samaritan was who saw what was happening was able to tackle the suspect and hold him down until officers were able to arrive and arrest him. He’ll face a couple of attempted murder charges as well as others.

This is not just a case of a good guy with a gun helping to stop a bad guy with a gun it’s also a case of gun-control laws in CA apparently failing to prevent a criminal from getting a gun and attempting to murder police officers with it. Who could ever imagine such a thing?? Will CA lawmakers learn anything from this? I wouldn’t hold my breath.

There are a couple of good things that can be learned from this case. First, always carry your gun anywhere it is lawful for you to do so. The guy walking down the street couldn’t have possibly expected anything like to take place right in front of him. We certainly don’t know the intentions of the fleeing suspect but a hostage situation would not have been beyond the realm of possibility.

Second, the CCW holder only fired as many shots as it took to stop the threat against him. After the one shot caused the suspect to fall, he stopped shooting.

Third, one round to the chest is not guaranteed to stop an attacker. This suspect was able to get back up and run some distance to an apartment complex. He was still a lethal threat though presumably, he decided not to further engage the CCW holder who also apparently exercised good judgment in that he didn’t continue to fire on a fleeing suspect and risk injuring other innocents and also risk potential serious legal issues himself.

Fourth, it’s usually not a great idea to get hands-on and tackle someone wielding a shotgun. Maybe the suspect being injured made it a bit less risky but the second Good Samaritan certainly risked his life by getting involved. There was no indication that the suspect had first threatened him so his actions would seem to on his own initiative. Maybe a second opportunity for a hostage situation was averted here. Still, the best course of action would be to stay out of the way, be a good witness and let the police handle it.

Very glad to see that this one ended well with no one being hurt except the bad guy.