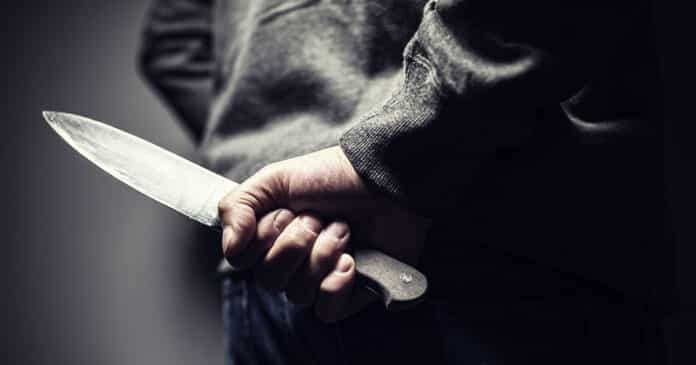 A Utah couple and their grandson were all hospitalized after the latter stabbed both of them in their home before being shot multiple times by the grandfather.

Margo and Charles Evans, 75, suffered their wounds from their grandson, Wade Evans, 28, before Charles shot him.

After Margo reported the attack to authorities, she was then stabbed by Evans after the call. Charles was able to obtain his firearm, shooting and striking Evans multiple times.

“This gave the stabbing victims time to leave the residence, get in their vehicle, and drive to the neighbor’s house and then call back reporting the shooting and their location,” Sevier County Sheriff Nate Curtis said.

EMT found the neighbors meanwhile tending to their wounds.

Police arrived at the scene, finding Evans wounded with a knife in his hand in which he approached officers with it. They then ordered Evans to drop it, and he did, officers taking him into custody.

“The evidence is pretty clear of what happened,” said Det. Sgt. Allen Pearson, Sevier County Sheriff’s Office. “There will be an arrest forthcoming.”

As the investigation remains ongoing, one can only wonder what led or what the motive for the attack was. Situations like these show how we should not undermine the reality of defending ourselves against anybody, as unfortunate as that sounds.

Having your home defense weapon ready is critical, especially as you are older and/or less able to obtain it from a more secure space. Establishing a mobile defense that works to your needs is important for your safety. Also, it would help if everyone in your household knows proper firearm safety to safely defend themselves when/if, say, you yourself are immobilized.

All wounded remain in critical but stable condition. Charges are pending, but hopefully, it is recognizable the shots were fired in a defensive matter, and the elderly couple will not be charged for defending themselves against a violent family member.