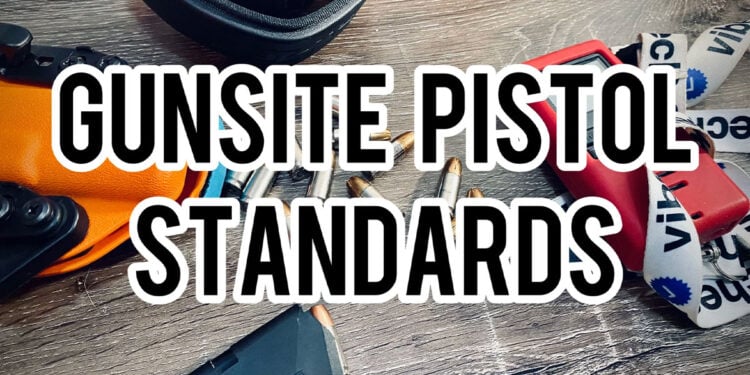 Anyone who has been interested in firearms training should at least recognize the name Gunsite. When Col. Jeff Cooper started the American Pistol Institute, later named Gunsite Academy, it revolutionized firearms training for the private citizen. Arguably, Gunsite, in one way or another, spawned the entire private sector firearms training industry that exists today. It is hard to argue with the success of some of the people who made their way through Gunsite, like Scott Reitz and many others of the same era.

Gunsite is still a thriving school, and their training is still considered some of the best around. Taking a look at their pistol standards, you can get an idea of what they expect a person to be able to do with a handgun. It is a test that will push most.

A couple of notes on the 15 and 25-yard strings of fire. In researching the course of fire, I found some versions that said the 15-yard string should be shot standing to kneeling (start at standing but move to kneeling for the 2 shots), and the 25-yard string should be shot from standing to prone. I shot the course of fire where I remained standing and also where I moved to kneeling and prone as necessary. Either way works, in my opinion. The time standard is sufficient to allow for the movement as long as you don’t dillydally.

If you wanted to be particular about it, you could shoot this course of fire on the Gunsite Option target. I am not that particular, so I used what I had available, an IDPA target. As long as you are using a target with an 8” circle in the torso and about 4” circle in the head, it should be close enough. The primary scoring zones just don’t need to get any larger than that.

This is a pass or fail course of fire. Everything hits the intended target zones, and you make it, or it doesn’t, and you fail. That adds an interesting layer of consequence to each shot fired. It was interesting to note the strings of fire where I was comfortable enough with the shooting task to let the shots fly and the ones where it caused a little hesitation to make sure I had everything cleaned up enough to get the hit. Those ones where the consequence of a miss caused a bit of pause are probably the skill areas where I need a little more work.

My Experience with Gunsite’s Pistol Standards

All of the strings of fire, except for the 15-yard string and 25-yard string, are pretty quick. Quick enough that if a person chooses to shoot them from concealment, they will need to hustle. The last two strings have plenty of time in them, which leads me to believe they are meant to be shot from kneeling and prone, as mentioned above.

On the topic of kneeling and prone. Shooting from kneeling is not something many people do very often. The movement while drawing the handgun can be enough to throw off how things normally line go. Shooting from prone is even more uncommon. It might be a good idea to research and polish up those skills a bit if you want to shoot the course of fire that way.

Get out there and do the work. This is a short course of fire but a pretty high standard. It would be a good goal to work towards with whatever gun we are carrying. If we don’t yet have the skill to pull it off from the holster, maybe shoot it from a low ready and work towards shooting it as written from the holster. If our range doesn’t allow kneeling or prone, that is okay. Shoot the course from standing. Just so long as we are putting in the work to get better and stack the odds in our favor.

Let us know how you do on Gunsite’s Pistol Standards in the comments below.