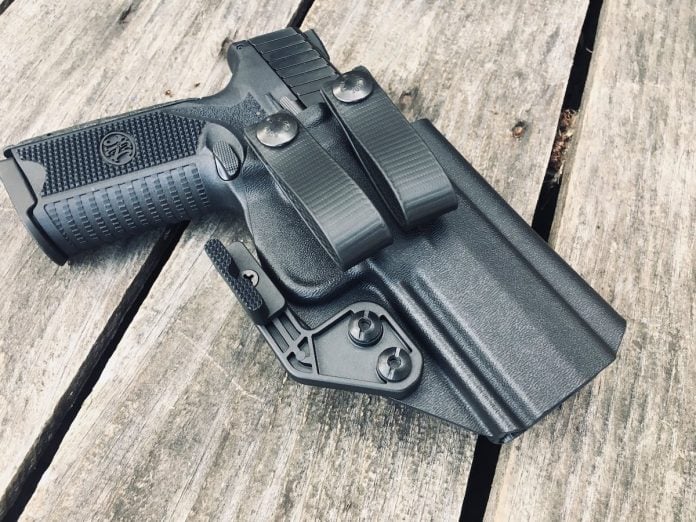 I have been carrying appendix inside the waistband for a while now, and my go-to holster has been the JMCK AIWB holster I reviewed a while back. It is a truly impressive holster, but my desire to try new things is never-ending.

There were a few things I was looking for in a new holster. I wanted a holster with a built-in “wedge” at the muzzle end of the holster, one that didn’t rely on a neoprene or foam wedge attached to the back of the holster. The holster had to use a ModWing or the new DSG Dark Wing. I wanted it to have two belt loops for attaching to the belt, be cut for a slide mounted MRDS and be capable of accepting a compensated 509 Tactical if I ever decide to go that route. Oh, and I didn’t want it to cost more than half a case of 9mm ammunition. The answer, Henry Holsters.

Who is Henry Holsters

Andrew Henry runs Henry Holsters. If I handed you one of his holsters and said the guy who designed and built this holster graduated from college with a degree in Viola Performance and Violinmaking you would probably laugh at me. The execution of the holster design and manufacture is top level. Not only does Andrew Henry design and build the holsters, but he also machines the mold used to vacuum form the holster. He pays attention to every detail.

I actually knew about Henry Holsters because of their affiliation with PHLster, who also sells holsters. (Shhh… Henry Holsters is actually the one making some of the PHLster stuff.) Even though Henry Holsters doesn’t seem to get much press, I knew with that sort of affiliation the product would likely be top notch. I was not disappointed.

The build quality on the Henry Holsters IWB/AIWB holster is unquestionably top shelf. He makes the holsters by vacuum forming the kydex sheet (technically Boltaron) on molds that he machines himself. Then he completes the final assembly by hand. The lines are crisp, the fit and finish is perfect, or as near to perfect as anyone is likely to get. The feature set also works well together. The mod wing is well positioned and comes with two different sized risers to adjust how much the holster tucks the butt of the grip. The riser inserts are also reversible so that they can be positioned slightly closer, or further away from the body of the holster. Use of the ModWing over other “wing” attachments allows for more end-user adjustment so that you can tweak the holster to your personal preference or need.

My particular holster I ordered with two soft loops, but there are some other belt attachment options available based on which gun the holster is for. Smaller guns can run tuck struts, different style clips, things like that.

The holster has a small “wedge” molded into the back of the holster near the muzzle. The purpose of wedges on the muzzle end of the holster is to cant the top of the gun that is above the belt line back into the body. The problem here is that people are shaped differently. So there is quite a balancing act that has to go on here.

The Henry Holsters wedge is enough of a wedge to do a little work. But given the shape of my body, I am a curvy dude (read: fat), I require a larger wedge. For the svelte among us, it would likely be sufficient. It also cannot be too large to allow for standard strong side IWB use of the holster. So I get where the limitation comes from. It is easy enough to address at the end user level with a $3 yoga block, a sharp knife, and some Velcro.

The end of the holster is open. So if I were to comp a 509, it would not have any problems accepting that modification to the gun. The holster is also sized to cover the threaded barrel on a 509 Tactical. So if someone is running that gun, they don’t have to worry about stuffing a gun with a hot muzzle down their pants when running drills or attending training. The length of the holster should keep the hot bits of the gun away from the sensitive bits of the body. The square opening potentially can create some discomfort depending on how the holster is worn. But it has not been an issue I have personally encountered with this holster.

As stated, the execution of the design is superb. I would challenge anyone to find a holster that is better produced than this one. That is not to say it does not have its own weak points though. The holster only has two sets of attachment points for the soft loops. If carrying AIWB, a holster that allows for very fine adjustments of holster ride height and cant is a pretty big plus. But with the Henry Holsters holster, you only have two options for ride height.

So what are my final thoughts? Is this holster a home run? I don’t know that I would go that far with it, but it is really close. It is definitely close enough to get everyone in the stands standing up and holding their breath. The only thing really holding it back is the limited ride height adjustment. It is still not a deal breaker, not even close. I am being very critical of the finest details here. The holster is undoubtedly good enough for me to be still using it. If you are looking for a holster for a mainstream gun, Henry Holsters is worth the look. The price point is hard to beat, and the product is top notch.