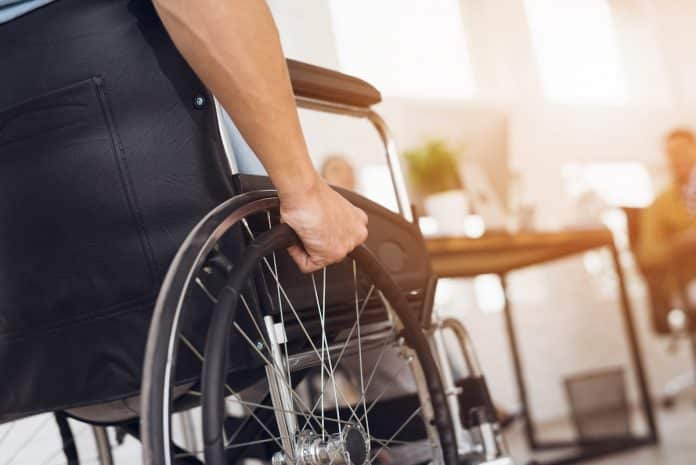 One of the most significant challenges that someone with a disability can face is to defend themselves against an attacker.

The reason this is a significant challenge isn’t just because those with serious disabilities are at an obvious disadvantage, but because they are also often targeted by criminals due to their vulnerabilities as well.

Obviously being a person in this position means that the odds are not in your favor in the event of a matchup against a physically healthy attacker, and to even the playing fields, a concealed handgun really is the best tool for defense. Keep in mind as well, a person with a disability may not be able to flee or even scream for help.

Remember, just because you have a physical disability doesn’t at all mean that you can’t learn how to shoot to defend yourself. In fact, thousands of people with disabilities across the United States do carry concealed and have used firearms in self-defense.

But something that’s complicating things a bit is the fact that people who have disabilities have a smaller number of concealed carry options as well, especially if they have limited mobility or are restricted to a wheelchair.

In this article, we’ll go over the best general types of holsters to use for concealed carry for those in a wheelchair, and then some examples of holsters that won’t exactly be the best choice as well.

The strong side hip holster is easily the most prolific holster type on the market today, meaning that the holster is carried on the hip on the dominant hand side of the user.

Furthermore, outside the waistband holsters are easier to draw, especially if you opt for a ‘high ride’ holster, meaning that the grip of the pistol or revolver will ride above the waist.

Retention is also excellent on quality outside the waistband holsters as well, and some may even come with a snap or a button that needs to be pressed before the weapon can be drawn.

All in all, a high ride outside the waistband holster is a very practical choice for those in a wheelchair, and as long as you have a shirt or jacket covering the gun and the holster, it can be easily concealed as well.

Appendix holsters are carried in the front of the body around the appendix (hence the name) and are carried inside the waistband rather than outside.

The one big downside to the appendix carry position is that it’s not the most comfortable, especially if you have to bend over to reach for something.

For those in a wheelchair, ankle holsters offer one big advantage and two very big disadvantages.

For one thing, they are very easy to conceal, so long as you are wearing pants.

But on the other side of the spectrum, only smaller sized guns with a more limited capacity can be carried in an ankle holster (at least comfortably), and furthermore, the gun is kept a long distance away from the user’s firing hand.

This means that being in a wheelchair, you will have to physically bend over a ways in order to access and draw the weapon. In many instances, this may not be practical or even possible for self-defense purposes.

Be fully aware of your physical abilities before deciding if an ankle holster is the best option for you.

A belly band holster is designed to be wrapped around the torso and then carried under a shirt.

Normally, belly band holsters are hardly the most convenient option for carry, especially if the person is wearing a button up shirt.

But for those in a wheelchair or even those who have to use crutches, a belly band holster can really be a perfectly viable concealed option for self-defense, especially if it’s carried in the upper abdomen region where the user would only need to raise their shirt with one hand and draw the weapon with another.

Again, it really comes down to the physical abilities in a shoulder and whether or not it compromises their safety.

Last but not least, shoulder holsters just might be the most practical carry holster choice of all for those in a wheelchair.

So long as you’re wearing a jacket of some kind, a shoulder holster can be quite comfortable, not to mention that it provides easy access to a firearm as well as spare magazines or speed loaders on the opposite side.

What’s important to note is that you want the holster to be in a horizontal position for ease of drawing.  Otherwise, it can be awkward to draw a pistol quickly from a vertical shoulder holster.

In short, shoulder holsters provide excellent accessibility to a firearm and spare ammunition but are only really viable in colder weather when the user is also wearing a jacket.

In conclusion, a firearm is simply the most practical and efficient tool that a person with a serious disability can use to defend themselves against an attacker.

As citizens with a right to bear arms, we have to be ready to take action to defend our lives if the situation ever arises. If you are someone with a serious disability or if you know someone who does, the above information should help you to make the best selection of holster for concealed carry.