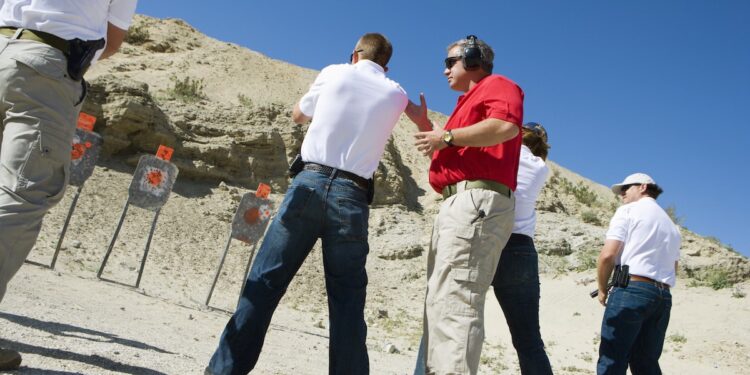 As a shooting instructor, I encounter a very common question: how should I stand when I shoot? Weaver? Isosceles? Any particular variation thereof? Well, as a default “shooting stance” to learn as a new shooter, modern isosceles proves the most functional and intuitive. That does not mean that Weaver is not functional, because it is, but Isosceles offers certain advantages, and it is what will generally be taught to new shooters. However, the problem I have with “shooting stance” in regards to defensive shooting is this: there is essentially no such thing. Do you know what a fight looks like? I have seen very few fights where people do anything remotely close to “standing” let alone standing in a shooting stance. It happens, but not often.

Many instructors, myself included, have moved away from the term shooting stance and instead refer to a “shooting platform.” With the concept of shooting platform, we refer to maximizing the upper body’s ability to make accurate shots with the firearm despite what the lower body is doing. Even if laying on your back, or if on your knees, etc…, a shooting platform can be achieved to maximize your effectiveness.

However, in regards to teaching people an initial and default shooting stance, my doctrine is quite simple: stand like you fight. With new learners, I honestly don’t even broach Weaver, or Isosceles, or anything in between. After all, defensive shooting refers to shooting as we would in a fight, correct? Most new students of the handgun are interested in learning how to defend themselves with the weapon, not on learning the history of competition shooting. So, when discussing the stance issue among the traditional seven fundamentals of marksmanship, I suggest standing like you fight. It needs not to be more complicated than this.

But how do you stand to fight?

Well, your body already knows how to stand to fight even if your 21st Century civilized mind does not. And, as we have learned in the past couple of decades, shooting techniques that work in line with what the body does naturally under stress are more functional in times of crisis than those that work against what the body wants to do naturally.

Think about this, as a youngster when you would play rough games, perhaps you still do, if a friend would charge you to tackle you and take you to the ground, how would you react by instinct? The natural fight mechanism of the human body is to square up with the upper body towards the danger and position the legs with one slightly behind the other for stability and power. The arms, by instinct, come up in a spear position with hands open, as if to push away danger like one instinctually does against a thrown object.

Another way to think about this natural fighting stance is the fact that it is the body’s natural way of leaning into the danger. Ending up on the ground on our back is generally bad, whether in a fist fight, gun fight, or thousands of years ago when tribal people ended up on the ground underneath an attacking saber-toothed cat.

So what is a natural fighting stance?

Therefore, the natural fighting stance is a slight lean forward, weight on the balls of the feet, not on the heels. This is how the body reacts to danger, it is part of the so-called flinch response or startle reflex, and no amount of training will overrule this instinct because such a posture puts your body in the strongest natural position. Therefore, as we have come to recognize this, we have started to capitalize on it in our training doctrine rather than resist it, and we move towards improved techniques.

A good combatives course will teach a “non-confrontational” default stance if facing possible danger which assumes this open-handed position. The side benefit of this stance is that it looks like you want to de-escalate the situation since it appears non-aggressive. In reality, it is the strongest fighting structure your body can assume, and it builds on what your body will do naturally anyway. With the hands up, fingers splayed, the arms are actually stronger than if the hands are clenched in fists because the flexor tendons further strengthen the arm structure when hands are open. This powerful structure can intercept any sneaky blows that your opponent makes.

This fighting stance, natures own, is the one that I suggest as a default shooting stance for the defensive shooter as it is what you will likely be in prior to deploying the firearm. The modern isosceles shooting stance is, by the way, very similar to this natural position.

So, my general advice to beginners when they ask me “how should I stand” is simply “stand as you fight.” Often in the real word gunfights start in response to hostile confrontations. If an adversary is standing at a distance where they can quickly close on us, we want to be standing in our fighting position. It is my suggestion that you use this stance as your starting point.

Practice your draw and presentation from this position as you will likely be in it. From this natural “non-confrontational” fighting stance the draw of the gun and a direct press-out into your line of vision proves very natural. Now we are working with a shooting stance that is in line with what our body will want to do by instinct. When we work with this natural inclination rather than against it, we leverage a technique that is much more functional under stress.