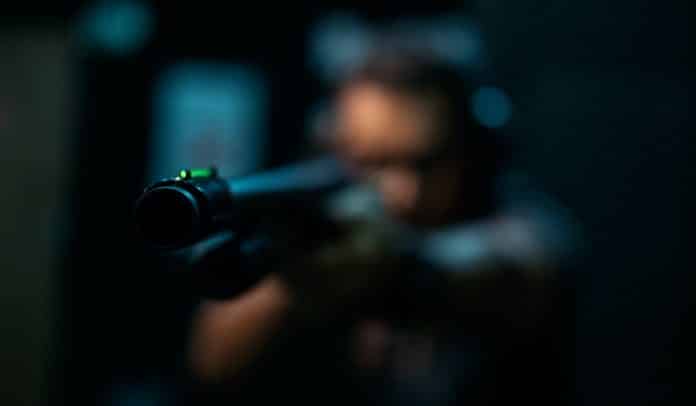 A Rome, NY home was broken into by a man wearing some sort of mask and carrying a handgun. He gained entry by removing an air conditioner from a window. After entering the room occupied by a man, woman, and a three-year-old, he stuck the woman several times in the head and then began searching the home.

Somehow a neighbor caught on to what was going on, took up a shotgun, and entered the home. He eventually confronted the suspect, chased him through the home, and ended up firing one shot at him. There was no evidence that the intruder was hit.

The intruder fled the home through a second-story window and was seen running toward an SUV waiting behind the home. The neighbor pursued and fired a second shot at the suspect.

“Police said the intruder turned toward the neighbor, at which time the neighbor fired a second round towards the suspect. The intruder was likely not hit, though the vehicle may have sustained damage, police said.” – Reported Observer-Dispatch

Police don’t believe the suspect was hit either time, but the SUV could have sustained some damage. The suspect did get away in the SUV.

This family was very fortunate that their neighbor was paying attention and was able to arm himself. It can be legally risky to come to the aid of others, but in this case, it must have been obvious what was going on.

The neighbor was fortunate that he was the only one doing the shooting. He could have ended up in a gunfight. He did make one potentially critical error, though, in that he pursued the suspect after he fled the home. He could have run straight into a group of armed criminals waiting in the SUV. Also, taking a shot at a fleeing suspect looks a lot more like revenge than lawful self-defense.

Once a threat has fled, let them go. Give the best description you can to the police and let them catch the bad guy.