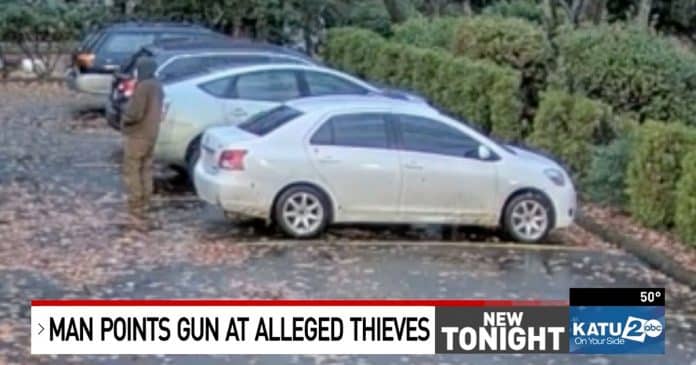 A Portland, OR. man thought he heard raccoons in his front yard and took a .22 pistol with him to investigate. Instead of raccoons, though, he found three people trying to steal the catalytic converter from his car parked in the street. He held them all there at gunpoint until police arrived.

“I’ve never pointed a gun at a person before,” he said. “That was the first time I ever had to do that, and I hope the last.”

He was briefly detained by police and then allowed to go back into his home. His gun was returned to him later. The three suspects were arrested, with two of them facing multiple charges for drug possession and outstanding warrants.

This homeowner was fortunate that the suspects didn’t have any weapons themselves and that they didn’t escalate the situation. But you have to wonder why the homeowner brought a .22 handgun outside with him to investigate raccoons. Pretty sure discharging a firearm in a city the size of Portland to rid your yard of raccoons is illegal.

The other dangerous move was to hold the suspects for police. It turned out well for him this time but that is usually not a good idea. He did not mention that the thieves threatened him in any way, so the gun use was primarily to stop a robbery and that is generally not permitted.

A better move would be to retreat to a place of safety (his home in this case) and call the police, get a plate number from the getaway car and be the best witness you can. Not all criminals (probably most) will not be this cooperative and wait for the police to come and arrest them. If he would have been somehow forced to fire shots to you think he would have been able to sleep in his own bed that night?