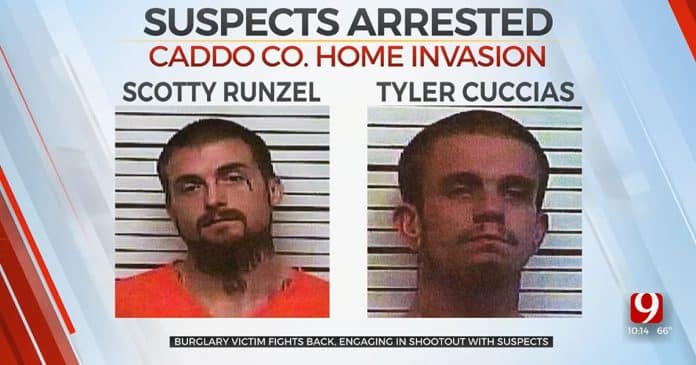 A rural Oklahoma man called his brother-in-law who lived down the road and told him he, “might want to come down because he is fixin’ to get burglarized” after he saw two men circling his home.

When the suspects kicked in the back door of the home, the resident fired at the invaders but didn’t hit either of them. One of the suspects fired back and they fled the scene.

The brother-in-law gave chase and the suspects fired through the sunroof. They eventually crashed into a tree and ran away on foot.

They were both shortly but separately taken into custody. Both had meth on them and were convicted felons.

“I would not advise breaking into anything in rural Oklahoma because they don’t mess around,” said the Sheriff. “Somebody might end up getting hurt.” via NEWS 9

This one had the best of all outcomes. The criminals were caught and no one, especially the homeowner, was hurt.

Can’t say that chasing the bad guys while they are shooting at you is a wise move though. In fact, it’s never a good idea to chase bad guys. Let the police do that. What are you going to do if you catch them? If you want to chase criminals go to the police academy and get a badge.