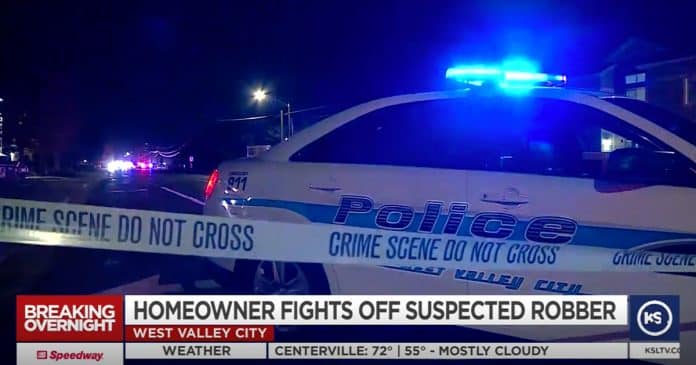 A Utah homeowner heard shouting and glass breaking outside his home. A neighbor’s cell phone video recorded someone asking if people want to die. He was also screaming for someone to open the door to a nearby apartment. He eventually broke through a window, causing the victims in that apartment to flee the residence to get to a safe location.

Knowing that there had been previous burglaries in the area, the homeowner went outside with a shotgun to investigate. He found the break-in suspect who charged him with a knife. The homeowner struck the suspect with the barrel of his gun enough to knock him to the ground.

When police arrived, they found the suspect lying in the street with a knife next to him. The homeowner told police the shotgun was not loaded.

That must have been quite the headshot to have knocked the suspect out enough for him to stay down.

This one ended well for the victims, but it could have gone very wrong for the homeowner who made some serious tactical mistakes.

First of all, if your home, and therefore you, is not under attack, it is usually best to stay in your home and let the police do the investigating, especially when you really don’t know what’s happening out there.

Second, if you see what’s going on and decide to bring a gun, don’t bring an unloaded one. That’s essentially bluffing deadly force, and you can count on an attacker to assume it’s loaded and respond accordingly and, in this case, try to stab you.

This homeowner was fortunate to stop the suspect by swinging what amounts to a long pipe at his head. He could have lost that fight and been stabbed to death.

Please remember that you could lose badly in any fight you choose to get into. And there is always the potential for a nasty legal battle that could follow. That doesn’t seem likely in this case as the evidence looks like pretty cut and dried self-defense, and no shots were fired, and no one died.

Please remember, we are not cops. We don’t have a duty to investigate anything. We own firearms for our own self-defense, and we need to avoid conflicts if it’s at all possible.