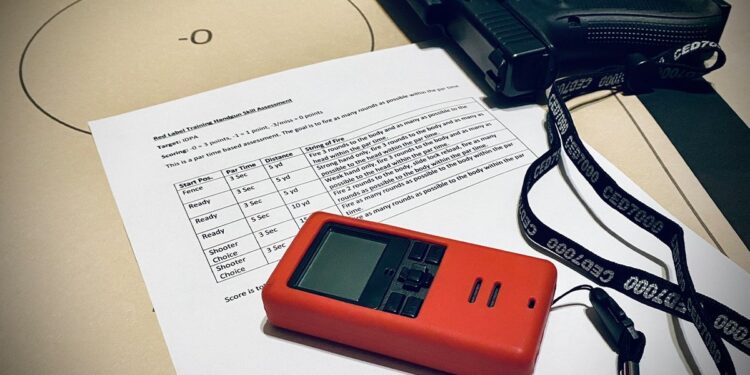 As a side gig to my side gig, I occasionally teach a class or two. I am a big fan of tracking performance over time and came up with a skills test that can be used for nearly any shooter skill level to use it in classes. Last year being the year that it was, I thought I would set it free and see and see what happens.

Historically, my favorite skills test has been Mike Seeklander’s Defensive Handgun skills test. The only downside is it is quite cumbersome and uses up a decent chunk of ammunition and time. While eating up a bunch of time might be okay for shooting a test on our own, assuming we have the ammo to do it, I needed something more versatile. My goal was to have a quick course of fire that can be administered to a large group of people fairly efficiently for classes. Bonus if it uses a smaller amount of ammunition.

The target used is the current version of the IDPA target with the 4” -0 in the head. Hits in the -0 are scored at 3 points each. Hits in the -1 zone are scored at 1 point each. The -3 or misses are scored at 0 points. Any shots fired within 0.25 of par still count. For anything more than 0.25 past par, subtract 3 points from the total score at the end.

The best part of Mike’s test is the scoring, so I adapted his system to my own test. All of the strings of fire are par time-based. The score is dependent on the number of rounds fired within the PAR and the quality of those hits. Each scoring zone is assigned a point value. For this test, the -0 of an IDPA target is worth 5 points. The -1 is worth 1 point, and everything else is zero. For example, 5 hits in the -0 on an IDPA would be worth 15 points, etc.

The course is intended to be fired from concealment, so the par times are set with that in mind. If you want to shoot from something other than concealment, reduce the par time by 0.50 seconds to get a more level playing field.

The Course of Fire

The strings of fire are as follows.

With only five strings of fire, the test only takes about 10 minutes to run. Depending on skill level, it will require 20-40 rounds. The higher the skill level, the more rounds that will be needed.

How Good Are You?

A score above 50 is pretty good. Above 75 is gettin’ it. Bumping over 100 is pretty baller. A score above 125, I think, would be boss level kind of stuff. I am sure it can be done, but it won’t be by me; my current high score is 86. While I am not the best shooter, I can usually hold my own. If you guys shoot it, let me know how you do and drop some feedback in the comments.