The best of the worst? 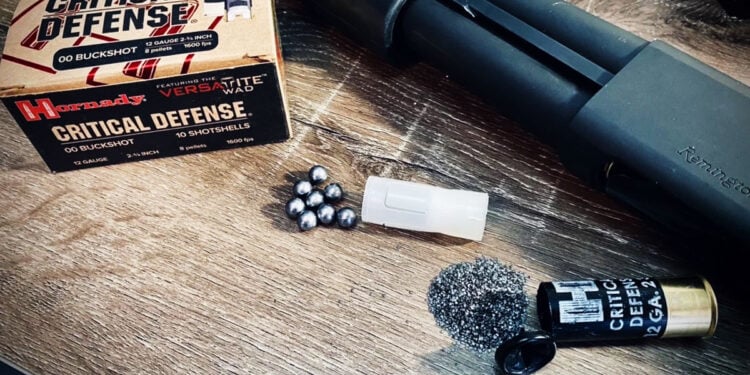 If you have been around the defensive shotgun scene for very long, you have probably heard of Federal’s Flite Control loads. We have even written about them here. Federal is the true king of the defensive shotgun ammunition hill. That doesn’t mean there aren’t other contenders that might be good enough though. Maybe call it the worst of the best, or something like that.

That is where Hornady’s buckshot loads tend to land. Hornady actually uses a wad design that is very similar to Federal’s Flite Control wad, Hornady just calls it Versatite. Rumor is that Hornady and Federal both licensed the design from the same person, but execute it a little differently which ends up yielding different results.

Critical Defense, And All Its Siblings

Hornady has a few buckshot loads available in their various product lines. There is Hornady Black, American Gunner, Critical Defense, and Varmint Express buckshot loads available on the commercial market. Then a couple of Hornady TAP loads on the law enforcement market just to confuse us a little more. The most frequently seen on the shelves of the local gun shop though is probably Hornady Critical Defense 00 buckshot.

For the most part, all of the Hornady buckshot loads share the same basic construction. They are all 2-3/4” 8 pellet 00 loads except for one (Varmint Express 3” load), they all use the same Versatite wad, none of them are buffered, and all except one (Varmint Express 3” load again), use plain lead pellets. The biggest difference between all of the 2-3/4” loads is velocity, and whether or not they have flash suppressed powder. In the case of Critical Defense, it is a full power (mega power?) load with a flash suppressed powder.

The Pattern Target Tells The Story

In my experience, in the handful of guns that I have patterned Critical Defense 00 loads in, it will give me about a 4”-5” pattern at 10 yards, and about an 8” pattern at 15 yards. Now, the tricky thing about shotguns is that they all don’t shoot the same, and past performance in one gun, is not a reliable indicator of future performance in a different gun. To know for sure how it would work for you, you would have to pattern it in your gun.

Critical Defense packs a nice wallop. The one thing I wish Hornady would do with their Critical Defense load though is make it lower recoil, aka lower velocity. They have other full power 00 loads for those that need it, most purpose-built defensive shotgun loads are low recoil for a reason.

On the box, it says 1,600 feet per second muzzle velocity, but Hornady uses a 30” test barrel to get their velocity numbers. In actuality it runs just over 1,400 fps out of an 18” or 20” barrel, like what is found on most defensive shotguns. That is still about 100 fps more than the on the box velocity of a “standard velocity” buckshot load, and probably close to 120-150 fps over actual velocity out of the same barrel length. If someone isn’t used to it or have the proficiency in technique to mitigate the recoil, it makes training/practice with the load a struggle. Outside of just being uncomfortable, it likely has a negative effect on the quality of the pattern as well. It will probably run the most finicky semi-auto shotguns out there on the plus side.

Critical Defense 00 wouldn’t be my first choice, and probably not my second or third choice either, but it does still pattern better than most generic buckshot loads in most cylinder bore guns. If you are willing to put up with the heavy recoil, it is probably worth a try, just keep your eye out for when the better stuff comes along.

Good Samaritan Brandishes Gun to Stop Armed Robbery; Gets His Corvette Shot Up

If you’re interested in where the wad came from, dig into Billimgs’ and their loads. I’ve still got some.

I haven’t got my hands on the Federal flight control ammo because of availability, but this stuff rocks in my Benelli M1014 with fixed modified barrel. 1.75” at 10 yards, 7.5” at 25 yards. Recoil is a little stiffer than other loads but very manageable in the Benelli. I can’t imagine the federal loads performing better than that.

I have not seen that kind of performance from Critical Defense personally, in the handful of guns I have shot it through. Shotguns are weird like that though. Some loads that don’t do that great in 4 guns will do great in the 5th gun.

I agree with that. I’ve wondered if it has to do with the modified barrel. Since it’s fixed, I can’t experiment with other chokes. On other guns, I’ve seen chokes tighter than cylinder improve buckshot patterns but they can also make them way worse. You just have to go with what works in your gun I guess.