by Jason Hanson
in Articles, Self-Defense
158 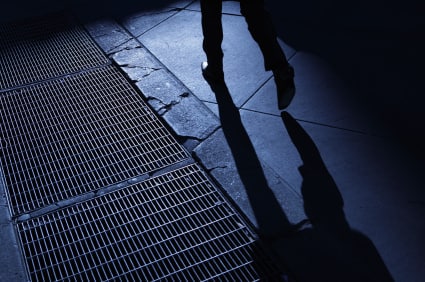 My recent article about the George Zimmerman verdict elicited a lot of feedback… some people agreeing with me and others disagreeing.

And since this case has already been talked about so much, I’ve decided to comment one final time about it to answer one gentleman’s question. In short, this gentleman sent me an email asking me the following…

“If you were being followed late at night, what would you do? Would you run? Would you confront the person stalking you?”

I thought this was a great question, and anyone who has taken my concealed carry training knows that my wife and I were followed in Baltimore City once. What I did in that situation was verbally confront the person (in a polite manner and with a polite tone of voice.)

In another instance, I was jogging in the early morning and two large gentleman were on the same path as me dressed in street clothes (not in running attire.) As I got closer to them they looked at each other and then spread apart to force me in between them and I simply ran to the side away from them.

My point is, if I was being followed late at night I would run if I could, but if the person was too close to me I would confront them. But I wouldn’t attack them, I wouldn’t physically touch them… I would simply ask them a question such as, “can I help you” or “do you need something” or something along those lines.

In other words, I would do what any one of us would likely do.

You see, the problem with the George Zimmerman incident was that it was a “perfect storm.” You had a wanna-be cop who did something stupid by getting out of his car that night. The thing is, and what people don’t seem to understand, is that even though what he did was stupid, it wasn’t illegal.

And when this wanna-be cop followed Trayvon Martin, he didn’t know he was following a person with a history of violence. The fact is, if George Zimmerman had followed 99 other people that night he might have got cussed out or they might have run from him. But he followed the 1 person in 100 who decided to attack him and try and beat the living daylights out of him.

So if I was Trayvon Martin that night I would have run if I could, or I would have verbally confronted George Zimmerman but I wouldn’t have attacked him unless he attacked me first, and from the evidence brought out during the trial that’s not what appears to have happened.

The truth is, I think it’s frightening that America is having such trouble with this verdict when it’s obvious George Zimmerman did something stupid (but not illegal), and doing something stupid doesn’t give someone the right to attack you. It is the same as if I was stupid enough to walk down a dark alley at 3am, that doesn’t give three guys the right to come out of the shadows and try and kill me.

So what would you have done if you were Trayvon Martin in that situation or what will you do if you find yourself being followed one day?